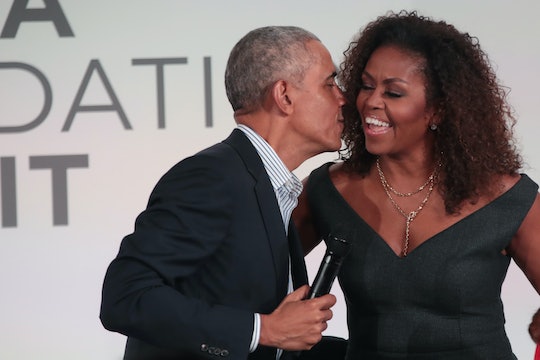 Here's How The Obamas Practically Won An Oscar

Barack and Michelle have been busy since leaving the White House. Among their many projects, a film production company, Higher Ground, helped the Obamas win an Oscar for American Factory, well, kind of. Higher Ground produced American Factory, and the film won the Oscar for Best Documentary Feature. If you want to be loose with the facts, the Obamas are on their way to an EGOT and no one can tell me otherwise.

OK, the Obamas weren't technically up for an Academy Award this year. Netflix released American Factory under the Obamas’ production company, Higher Ground, but the former POTUS and his First Lady were not directly involved in the making of the film. Their names aren't in the credits and they will not receive statuettes, according to CNBC. But, you know what, whatever.

Michelle Obama tweeted out her support for everyone involved in American Factory following its Oscar win. "Congrats to Julia, Steven, and the whole crew on winning Best Documentary for #AmericanFactory, Higher Ground's first release," she wrote. "So glad to see their heart and honesty recognized—because the best stories are rarely tidy or perfect. But that’s where the truth so often lies."

While the Obamas haven't officially won an Oscar yet, the power couple have quite a few other awards under their belts, with everything from a Grammy, to an NAACP Image Award, to the Nobel Peace Prize in their trophy room (I'm imagining a room like Timmy Turner's dad has on Fairly Odd Parents with an empty spot for their Oscar) and I have no doubt that an Oscar will make its way there soon. American Factory was only Higher Ground's first release, so there's still plenty of time for my Obama Oscar dreams to come true.

More Like This
Kristen Bell Just Hinted That 'Frozen 3' Is Maybe (Hopefully!) In The Works
Here’s What The Voices Behind The Characters Of Lightyear Look Like In Real Life
Emma Thompson Shotputs A Child As Miss Trunchbull In The Matilda Musical Trailer
Janet Jackson's Son Eissa Is A Little Musical Prodigy In The Making