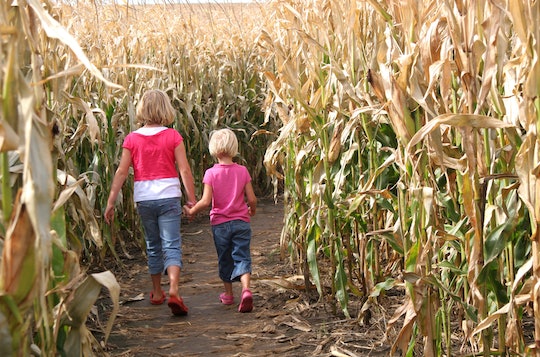 There have to be few things as heart-stoppingly scary as a parent than losing your kid out in public, but honestly, it's not all that difficult to do. Most parents have a story of a runaway toddler hiding in a clothes rack at the mall, for example, or of a kid disappearing out of sight when parents turned their heads for what seems like two seconds. But while those experiences usually turn out to be only brief scares, a 3-year-old Utah boy went missing in a corn maze last week, and wasn't reunited with his parents until the next day. On Friday, the parents who "forgot" their kid at a corn maze responded, and while it sounds like the incident was a really unfortunate mistake, it's still majorly unsettling.

According to The Salt Lake Tribune, the young boy and his family took a trip to a local corn maze on Columbus Day, and it sounds like it had been a pretty fun outing. When it was time for the family to leave, one of the boy's older siblings saw that someone near the corn maze was giving out free doughnuts, and had asked permission to go wait in the 15-minute line. What no one realized, though, is that the young boy had also left the car, and had headed back into the maze on his own. What they also failed to realize once they got everyone back into the car and headed home? The boy wasn't with them.

A woman visiting the corn maze discovered the boy later that evening, at around 7:30 p.m., but the boy's family didn't actually realize he was missing until the next morning, according to local news station KUTV. The corn maze staff told KUTV that the boy was upset, but was only able to tell police the names of his brothers, and when they tried to locate the family at the corn maze, they were unsuccessful. The Utah Division of Child and Family Services kept the boy overnight, until the boy's mother reported her son missing the next day. He's has since been reunited with his family and is doing well, but it's pretty harrowing to think that the parents could have gone that long without even realizing their young son wasn't with them. And unsurprising, when the story made headlines, that's exactly what people were asking.

In an interview with The Tribune, the boy's father — who used only his first name, Robert — explained that it really just came down to the fact that he has such a large family. Robert told the outlet that he has a "plural family," and though he was referred to as "polygamous" by The Tribune, he didn't actually specify whether he had more than one wife, or if some of his children may be from previous marriages or from polyamorous partnerships. He did say though that he and his wife have 14 children between them, eleven of which went on the corn maze outing, along with a few of their cousins, traveling in multiple cars.

When the little boy jumped out for doughnuts, his mom thought he was still in the car. When the other kids got back into the car, no one realized the boy was missing, and they still didn't realize he was gone later on that night, when the family went back home and stayed up to watch a movie, breaking from their usual bedtime routines. It was only when the family woke up the next morning and the kids began getting ready for school that anyone actually noticed the boy was gone, and Robert told The Tribune that when his wife made the discovery and called him, she as "in a such a panic, she could barely get the words out of her mouth."

The family says they cooperated with police and DCFS workers, and that they were grateful for the care their son received that night, and "thankful that everything went right." Robert also stressed that although he has a plural family, it has "nothing to do with why his son was mistakenly left behind."

As easy as it is to judge this family, if you've ever been in a situation where you've lost your child, even for a moment, you can at least appreciate how easy it can be for something to happen accidentally, and how awful the boy's parents likely feel right now. At the same time, it's concerning to think that it was possible for a 3-year-old boy to go missing and that his parents and siblings could go that long without even noticing.

The good news, at least, is that the little boy was found safely and take care of, which is a huge relief. And it doesn't seem unreasonable to expect that the incident has probably been a huge wake-up call to the family to be a bit more vigilant in the future — a reminder that all parents could probably benefit from.