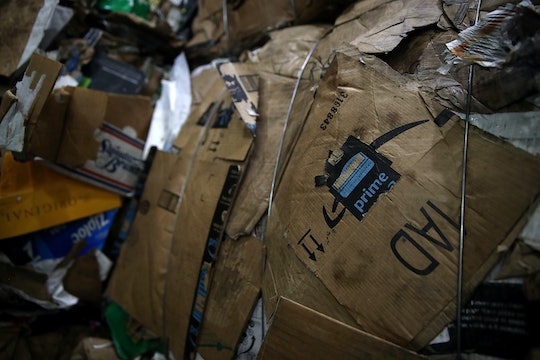 Here Are The Funniest Reactions To Amazon's Prime Day Crash

Amazon's Prime Day is an event customers look forward to every year. Unfortunately, this year's Prime Day hit a major snag when Amazon's website crashed on Monday, temporarily signaling the end to deals galore. Although the outage was frustrating (emphasis on frustrating), the hilarious reactions to Amazon's Prime Day crash somewhat made up for the drama. There's something very satisfying about commiserating with strangers on the internet, right?

Monday morning was nothing short of dramatic, to say the least. While one half of Twitter was busy reacting to President Donald Trump's controversial meeting with Russian President Vladimir Putin, the other half was in meltdown mode about Amazon's website crash. Yep, this week is off to an amazing start.

So, what caused Prime Day to go up in flames? At about 3:10 p.m. Eastern Time, customers reported issues with checking out and adding items to their cart, according to Market Watch. Most consumers were directed to an error page which read, according to BuzzFeed News: "SORRY something went wrong on our end." To add insult injury, the message was accompanied with pictures of dogs — aka "the dogs of Amazon." Leave the adorable innocent and dogs out of this, Amazon.

Amazon did not immediately respond to Romper’s request for comment.

The most maddening part about this debacle, however, might be the fact that Amazon's founder and CEO, Jeff Bezos, became the wealthiest man in modern history amid the website crash, according to Bloomberg. Bezos' net worth topped $150 million on Monday, making him richer than Microsoft founder Bill Gates, according to Fortune. Yep, life is undoubtedly unfair.

So, if you're feeling a bit ragey about Amazon at the moment, find solace in these hysterical reactions to the Prime Day mess.

Some People Were Relieved

"God bless Amazon’s IT department, one person joked. "I was about to go on there and buy some stuff that I had no business buying.

"Soooooo.. I can see the wildly mediocre deals, but I can't add them to my cart. Yeessss.... Automated self control," another person agreed. "Thank you @amazon for showing me the evil of my ways. #PrimeDay."

"Oh I get it, the Amazon #PrimeDay deal is that you get to save 100% of your money," one commenter said.

Others Were About The Cute Dogs

AMAZON STAFF: Mr. Bezos, we are spiraling out of control here. People are losing their minds. #PrimeDay is a disaster. What do we do?

"How many Amazon #PrimeDay dogs have you caught today???" one person joked. "We’re waiting on the ultra-rare one to pop up."

One dog enthusiast reasoned: "So Amazon Prime day is already glitching, but at least I get to look at dogs when I refresh it #AmazonPrimeDay #DogsForDays."

Jokes aside, it's clear many people are frustrated with Amazon, and some customers are threatening to cancel their Prime memberships. “There is no doubt that this will erode sales and deter some customers from buying,” Neil Saunders, the managing director of research firm GlobalData Retail, explained to The Washington Post. “The outage is especially problematic as many of Amazon’s Prime deals are promoted for a set window of time – something that could cause a great deal of frustration for potential customers.”

Not to mention, Amazon warehouse workers across Europe took to the streets on Monday to protest the company's "poor working conditions," according to The Verge, and many customers have expressed concern about its business model.

All in all, it sounds like Amazon (and many of its customers) had a pretty awful day. The upside? The internet delivered in the jokes department. Sometimes you got to take the good with the bad, people.