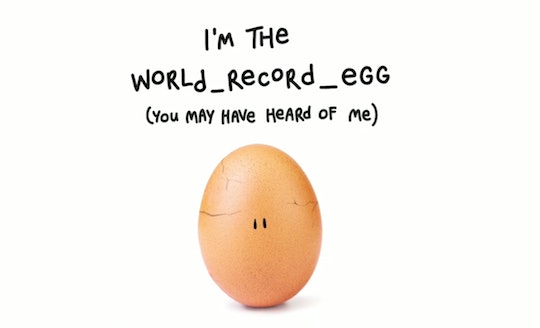 The sudden — and frankly rather inexplicable — viral success of the Instagram account @world_record_egg may have earned it a Guinness World Record in January for being the most-liked photo on Instagram. And given that it happened to also knock megaceleb Kylie Jenner from the top spot, it made for a pretty entertaining story. But it was the kind of stunt most seemed to assume would fizzle out quickly, which is why it's honestly surprising to hear that the record-breaking viral egg that outdid Kylie Jenner is back. But what's even more surprising? The owner of the account is using his unexpected fame to raise some very much-needed awareness about mental health.

Though not much was originally known about who was actually behind the record-breaking account that simply featured a stock photo of an egg, The New York Times revealed Sunday that it was actually British "advertising creative" Chris Godfrey, who'd simply wondered if something as silly as an egg could ever drum up enough likes to set a social media record.

With the help of a few friends, Godfrey clearly made it happen, as Guinness World Records actually confirmed in early January that world_record_egg took Jenner's title, thanks to the pic's 29 million likes. (As of publication, the same photo has more than 52 million likes.)

As much as the record-breaking egg seemed like a silly internet novelty though, the fact that it was able to somehow mobilize enough online support to go viral so quickly, and earn the coveted "most liked" title meant that it was likely only a matter of time before big-name companies started to call with ideas for partnerships.

Yet the egg's first gig following its sudden internet fame may not have been one that many people would have anticipated. Eugene — the name since given to the viral egg — is now promoting mental health on behalf of the non-profit Mental Health America, according to The New York Times, and it's honestly pretty impressive.

On Jan. 18, Godfrey posted the first new image to his Instagram account, which had previously just been one, solitary pic of the famous viral egg. And while the new photo was essentially the exact same, there was one important difference: it showed a tiny crack in the shell.

Subsequent posts were similar, although with slightly more cracks forming, until Feb. 1, when Godfrey posted a football-themed egg pic, and wrote, "The wait is over. All will be revealed this Sunday following the Super Bowl."

And finally, it came: a video of Eugene cracking under the pressure of social media, in an attempt to promote the mental health resources website, Talking Egg.

Though it appears to still be in the early stages, the Talking Egg website lists links to various other mental health sites around the world meant to assist people who are struggling (Talking Egg also has a related Instagram page, though, nothing has yet been posted).

So far, it doesn't seem clear what the next steps are for the site — if there even are any — but given how much attention the original egg photo received, and then how much speculation mounted about all the major financial opportunities that would come as a result, it feels almost shocking and refreshing that Godfrey opted to promote mental health, when presumably he could have been promoting other much more lucrative opportunities.

In fact, one ad executive even told The Atlantic that "being the first brand to crack out of the egg is worth at least $10 million," which is a pretty hefty payday for someone who just posted a photo of an egg online. But Godfrey told The New York Times he saw it a bit differently, and that, as far as he was concerned, the goal was simply "promoting positivity."

At a time when the ultimate dream seems to be to become rich and famous on Instagram, the world_record_egg's story is unusual for so many reasons. And though it honestly still seems kind of odd and surprising that the egg photo took off the way it did in the first place, it is pretty remarkable that now, that unexpected fame is being used to actually do some good.

More Like This
Reddit Is Not Impressed With Dad Who Hid Neighbor's Gnome Because It Scared His Kid
There's Now A Tampon Shortage... Because Baby Formula Wasn't Stressful Enough
A New 3-Digit Mental Health Hotline Is Launching Soon
Sox The Cat Is The Companion We Never Knew Buzz Lightyear Needed