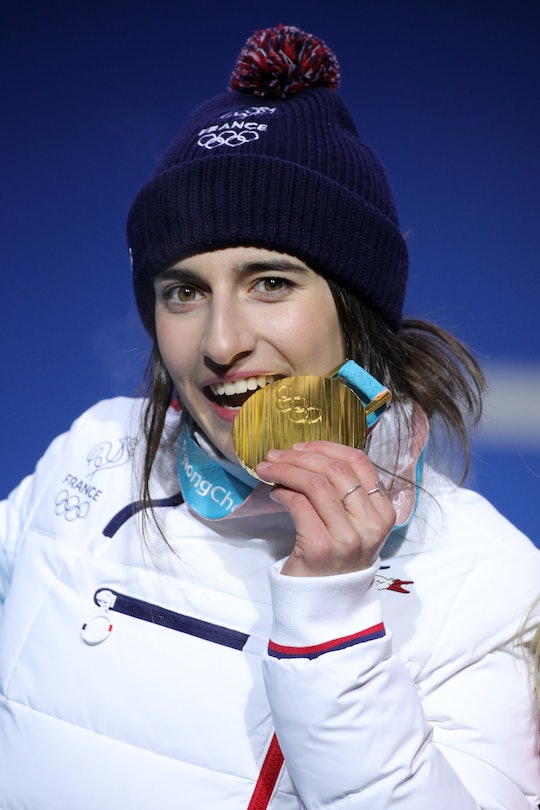 The Symbolism Of The 2018 Olympic Medals Is Pretty Powerful

To say a lot of planning goes into the Olympic Games would be a bit of an understatement. From where the event will be held to the Opening Ceremony performances, a lot of thought and detail is needed to make each Summer and Winter Olympics special. And one area of planning that's especially important? The Olympic medals of course. The medals are actually conceptualized and designed long in advance. Although the medals of years past are all unique, the symbolism of the 2018 Olympic medals is particularly meaningful.

In September 2017, the designs for the 2018 Olympic medals were revealed to the world, according to Sports Illustrated. Lee Suk-woo, a South Korean industrial designer, designed the medals to represent important aspects of Korean culture.

It's the host country's responsibility to come up with the designs for the medals and it's tradition for the medals to reflect the influences of the country, according to INSIDER. The 2014 Olympic medals, for example, featured a mosaic design that represented the "various culture and ethnicities of the Russian Federation," according to the Olympic's official website. Additionally, the medals were inspired by the "snow mountain tops" and "sandy beaches of the Black Sea coast" of Russia, where the 2014 Winter Games took place, according to The Atlantic.

So, how did Suk-woo honor Korea and the 2018 host city, PyeongChang, in his designs? The answer is beautiful and moving.

The medals touch on three important important representations of Korean culture, according to The Korea Herald: Hangeul, the Korean alphabet and Gapsa, a traditional Korean fabric.

As you can see below, the texture of the medals is reminiscent of tree trunks, which is symbolic of the Olympic Games' long history and the determination of its participants.

Furthermore, the tree trunk design acts as a base for the Korean consonants wrapped around the medals' cylinder shape. The lettering spells out "Olympic Winter Games PyeongChang 2018," according to Forbes.

In a statement, PyeongChang’s organizing committee said of Suk-Woo's thoughtful design, according to The Korea Herald:

To top the gorgeous design off, Gapsa, a light and sheer cloth, was used to create the blue medal lanyard. The lanyard is embroidered with the five interlaced Olympic rings and the host city's name, "PyeongChang."

What makes the design especially meaningful, however, is that it represents all of Korea. North and South Korea worked together at the 2018 Olympics, putting aside longstanding differences. It's a stunning display of cooperation and many people are impressed with South and North Korea's united front. The medals are an important reminder that North and South Korea have a lot in common despite their complicated history and tension regarding North Korea's nuclear weapons programs.

Lee Hee-beom, the president of the PyeongChang organizing committee, reiterated the call for unity between North and South Korea in an additional statement about the medals.

Hee-beom said, according to The Los Angeles Times:

The medals are a wonderful compilation of our culture, tradition and the Olympic values wanted the medal to be a symbol of Korea and all the wonderful memories that the athletes will take home from their time here."

More Like This
The Summer I Turned Pretty Is A Beautiful Coming-Of-Age Story For Teens & Parents
This Map Illustrates Just How Many States Would Ban Abortion If Roe V. Wade Is Overturned
Keep Talking To Your Kids About Abortion — It's More Important Than Ever
Obamas Issue Powerful Statements After Supreme Court Ends Roe v. Wade