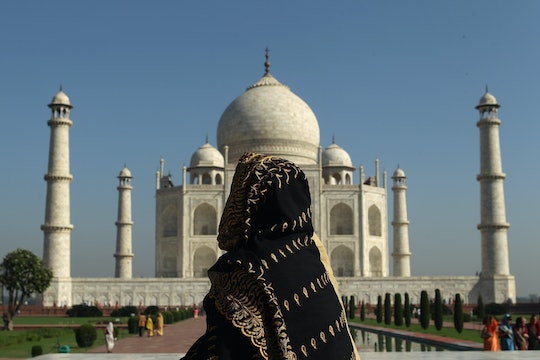 No matter where mothers are in the world, breastfeeding is a natural and necessary process — but society doesn't always make it easy. From a lack of designated feeding areas to societal acceptance, women often need to jump lots of hurdles to breastfeed on the go. But changes are being made, and this time it's happening outside the United States as a 387-year-old famous monument is getting a very modern upgrade. As Reuters reported on Tuesday, May 21, the Taj Mahal will soon have a breastfeeding room for nursing mothers, and it marks an incredible first for the historic landmark in India.

The Archeological Society of India is earmarking space at the Taj Mahal specifically for a breastfeeding room, a progressive step towards the normalization of breastfeeding in the country, according to The Times of India. And the room — which will reportedly include lights, fans, chairs, and tables — should be available for mothers to use in the next two months.

The Taj Mahal is just one of more than 3,000 other monuments in India, and two others, the Agra Fort and Fatehpur Sikri, will also receive similar feeding rooms, according to The Times of India. This is certainly a fitting addition to a building that was originally erected as a monument to women who died in childbirth, according to Reuters.

The Taj Mahal is one of the modern seven wonders of the world, which also includes The Great Wall of China, Brazil's Christ the Redeemer Statue, Machu Pichu and more, according to The New York Times, so the addition of a breastfeeding room will undoubtedly be useful for its many visitors. Indeed, with over 8 million visitors annually, according to Smithsonian Magazine, this is sure to be a welcome change.

And it may also go a long way in helping normalize and support breastfeeding mothers locally. According to The News Minute, an Indian news site, less than 55 percent of Indian newborns are breastfeed, which could be due to family pressure to bottle-feed, minimal understanding of breastfeeding and its many benefits, and of course, a lack of designated areas.

The idea for the breastfeeding room reportedly came when a leading member of the Archeological Society of India saw a mother hiding under a staircase to feed her baby, according to Reuters. "I could see it was so difficult for her (to feed her child) which is a basic motherhood right. So I thought we have to do something," Vasant Kumar Swarnkar told the news outlet.

Just last year, in fact, a Kolkata mother was asked to breastfeed her 7-month-old baby inside the bathroom rather than inside the department store she was shopping at, according to Asian Age. What's more, managers at the store reportedly told her to "take of her home chores at home." Unsurprisingly, this sparked major outrage and days of protests, according to the Deacon Chronicle.

This sort of thing happens all the time at home in the United States, too, even though all 50 states have laws in place to protect breastfeeding mothers in public, according to USA Today. In Georgia, for instance, a 28-year-old mother was asked to cover up while she fed her 2-month-old baby in an H&R Block, according to TODAY. And in Hawaii, a woman was reportedly asked to cover up as she breastfed, and she covered her face with a baby blanket instead her breasts, according to CBS News. Talk about laughing in the face of adversity.

With the Taj Mahal adding an accommodating space for mothers to comfortably feed their babies, hopefully more historic landmarks will soon follow suit.

More Like This
Breastfeeding Twins: Everything You Need To Know
This Reddit Post About Two Sisters In A Fight Over Breast Milk Is Complicated & So Sad
6 Ways To Fix A Shallow Latch So Your Baby Can Nurse Properly
Your Guide To Taking Tylenol While Breastfeeding