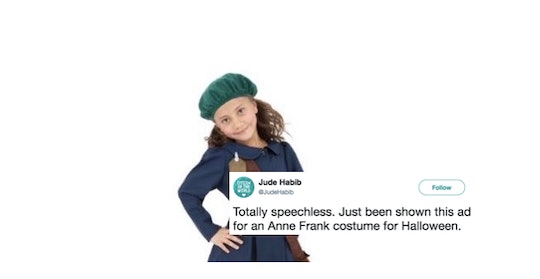 There's Literally An Anne Frank Halloween Costume For Girls & Why, Just... Why?

Halloween costume season often yields some pretty outrageous ideas. Appropriating or fetishizing another culture, race, or historical figure happens way too often. And one of the latest is this Anne Frank Halloween costume, which was being sold to young girls by various online retailers. As many online quickly pointed out, this costume is incredibly disrespectful and tasteless, and marketing it in such a way only trivializes this Holocaust victim's legacy.

Romper has reached out to the various companies selling the costume (including Candy Apple Costumes, HalloweenCostumes.com, and Walmart) but has not heard back at this time. Ross Walker Smith, a PR specialist for HalloweenCostumes.com did issue a response, however, insisting that the website provides costumes for "school projects and plays" that are meant to be "historically accurate."

Since the initial outrage erupted, the costume has been removed from the website. "We apologize for any offense it has caused, as that's never our intention," Smith said, according to a screenshot of message he shared on Twitter.

Walmart appears to have removed the costume from its website as well, but a simple search for "girl's World War II costume" will lead you to other, smaller sites still stocking the merchandise. The Anne Frank costume is comprised of a green beret and navy blue dress. These pieces are accessorized with a satchel and a "destination tag" on the collar.

The costume, which has been marketed a number of ways — both as an Anne Frank-specific outfit along with a general World War II evacuee costume — had the following description on HalloweenCostumes.com, according to the Daily Dot:

We can always learn from the struggles of history! Unfortunately, World War II shook the world in a way that no one could have foreseen. It ... created some unexpected heroes, where even a young girl like Anne Frank with nothing but a diary and hope could become an inspiration to us all. We can all learn from someone like that!

One site, Candy Apple Costumes, marketing the outfit as a theatrical costume explained on its website, "This child size 1930s-1940s girl costume was designed by a British company to represent the British children who were evacuated from London to the countryside during World War II, like the Pevensie children in the Narnia books." The company, a "small family business," explained to Romper why it's sold the costume in an statement:

This costume is part of our Historical Costumes page and our Heroes in History page ... The time period and style of clothing is the same as for Anne Frank, so we added a suggestion that perhaps parents might like to purchase this costume for children doing book reports on her important diary. We have been selling this costume for several years for this purpose. We also sell Frederick Douglass and Harriet Tubman costumes for kids, because we believe it’s important that history not be whitewashed. We want kids to have the option to dress up as people of color and feminist icons such as Anne Frank for their school projects ... However, we understand that impact is greater than intent and are open to feedback on the right wording to use to express the purpose of this costume more clearly, without triggering pain for Jewish people. One customer suggested it might help to add more historical context. We welcome any dialogue on this subject.

Many online users wondered why companies thought it was OK to turn a profit off of the tragic death of a 15-year-old, Jewish victim of the Holocaust. "We should all be learning this sad history, but it's not appropriate for children's dress up play," one user on Amazon wrote.

Another commented, "Children fleeing from war, persecution, and death is not for play. Invoking Anne Frank's name ... to advertise your children's costume is disgusting. All the more so when you consider the fact she was NOT evacuated and instead perished in a concentration camp."

Many on social media have called out these companies, demanding the product's removal. "Really an Anne Frank costume?!?! Could you be anymore disrespectful," one Twitter user asked.

Users have also pointed out that the current reemergence of Nazism in the United States makes this careless costume even more inappropriate. "In today's climate of anti-Semitism and anti-refugee vitriol," Amazon reviewer Emily Randall wrote, "monetizing that ... pain is abhorrent."

White nationalists, the "alt-right", Nazis — all of these groups encapsulate hate, white supremacy, and intolerance, decades after a World War sought to put and end to such persecution. Costumes that trivialize this suffering into an outfit meant to be worn one night for fun appear to ignore the 6 million lives taken by German Nazis, along with the residual hate that persists.

Is Anne Frank a hero children should work to emulate and revere? Absolutely. But, actually engaging with the significant parts of her story (as written in her diary and as experienced in museums) is much more respectful than simply donning a superficial, supposedly identical outfit.