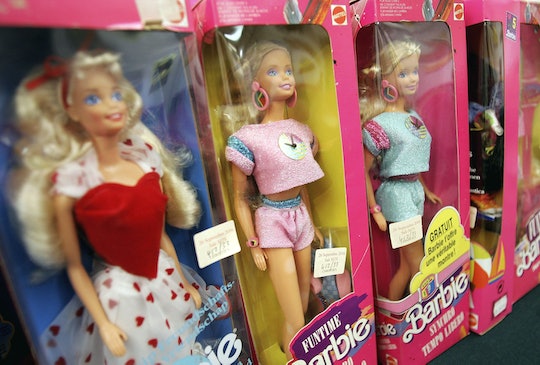 In the past few years, Barbie's been making an effort to be more inclusive and feminist, but this the first time she's taken a political stance. This week, Barbie stood up for LGBTQ rights and people are absolutely loving it — they're also loving the super cute T-shirt that actually supports LGBTQ causes. What's not to love?

If you're not following Barbie Style on Instagram yet, you really should. The account is where Barbie shows off all of her friends and new clothes, along with particularly cheesy and pun-filled captions. It's great. This week, she posted a couple pics of her and her friend, Aimee Song, a Los Angeles-based fashion blogger and designer who just got her own Barbie. The clothes on this Barbie are out of this world. In one pic, the two women are actually rocking mini-Self Portrait dresses by Malaysian designer Han Chong. You can actually buy the IRL versions right now, too.

In another picture, though, the two are out getting brunch wearing "Love Wins" T-shirts. The shirts are modeled after Song's own line of T-shirts. The T-shirt comes in two colors, red and white, with embroidered rainbow letters and retails for $68 on her website, Song of Style. While that might seem steep for a T-shirt, it's worth it. Half of the profits from the shirts go to the Trevor Project, which does outreach for LGBTQ youth.

Aside from a few trolls, the response on Barbie's Instagram profile has been super positive. Since we all know that Barbie and Ken have had a long relationship together, tons of commenters were thrilled to see Barbie not just supporting LGBTQ rights, but many also imagined that maybe she was "coming out as bisexual," though that's just a fan theory, since Mattel and Barbie were only plugging the "Love Wins" shirts in the Instagram post.

Others felt bad for Ken and wondered if he was getting his own "Love Wins" shirt, too. Ken's actually become a gay icon since the 1990s when he was sold as "Earring Magic Ken," complete with an earring and a necklace that resembled a sex toy. So, Ken's probably very happy that Barbie has come out in support of the LGBTQ community, even just as an ally.

It's not clear if Song's Barbie is part of the Shero Program or not, but she definitely should be, with the LGBTQ shirt included. The Shero Barbies are dolls modeled off of real, inspiring women, such as Ava Duvernay, Ashley Graham, Misty Copeland, and Gabby Douglass.

The first Shero doll was a one-off doll modeled after Zendaya Coleman, who was criticized for wearing her hair in dreads to the Oscars in 2015. Her Barbie celebrated her hairstyle instead of whitewashing it. Since then, they've continued to release dolls that celebrate all kinds of women.

Earlier this month, Barbie introduced a doll for American Olympic fencer Ibtihaj Muhammad, who was the first American to compete and medal in the Olympics while wearing a hijab. The doll is the first Barbie to ever have a hijab, again challenging traditional beauty standards.

According to PR Newswire, Sejal Shal Miller, vice President of Global Marketing for Barbie, said in a press release:

Barbie is celebrating Ibtihaj not only for her accolades as an Olympian, but for embracing what makes her stand out. Ibtihaj is an inspiration to countless girls who never saw themselves represented, and by honoring her story, we hope this doll reminds them that they can be and do anything.

The doll was introduced at Glamour's Women of the Year LIVE Summit, along with other Shero dolls. Glamour editor Cindi Leive said of the doll in a press release:

Ibtihaj Muhammad has challenged every stereotype — which to me is the definition of a modern American woman. Last year, she was the first athlete from the U.S to compete in the Olympics wearing a hijab, and today we are thrilled to celebrate Ibtihaj as the first hijab-wearing Barbie. She will play a tremendous role in ensuring that girls of the future see themselves represented fully and beautifully in our culture.

Adding Aimee Song to the mix and rocking a "Love Wins" T-shirt is just another step in representing all kinds of women, all the time. This new generation of Barbie dolls are definitely not the ones most of us played with as kids. And that's a really good thing.