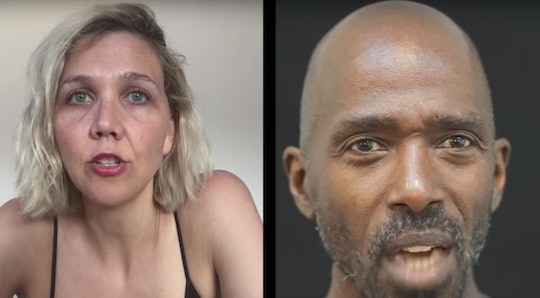 Although the Trump administration reversed its policy of separating immigrant children from their parents at U.S.-Mexico border after facing international criticism, there is still a lot to be done to protect the rights of these families. That's why the American Civil Liberties Union (ACLU) has teamed up with top Hollywood stars including Ryan Reynolds, Chadwick Boseman, and Maggie Gyllenhaal to make sure this ongoing humanitarian crisis stays alive in the news. In a new video released this week by the ACLU, a slew of celebs read an immigrant mom's child separation story and once you watch it, it will move you to keep on fighting.

The campaign — which features stars like Amy Schumer, Aubrey Plaza, Glenn Close, Jeff Bridges, Kumail Nanjiani, and more — has a simple, moving format: Hollywood stars read an immigrant mom's heart-wrenching letter about her child being taken away from her at the border. The statement is from a woman named Mirian, an immigrant from Honduras who came to the Texas border seeking asylum from government violence with her 18-month-old son, according to CNN.

Although Mirian passed the United States' complex system's first hurdle, "a credible-fear" screening (meaning she has a credible reason she cannot safely return to her country), according to The New York Times, she was separated from her son for months. As terrible as Mirian's story is, she isn't alone: The Trump administration admitted it will likely not make its current deadline to reunite immigrant families, with CNN reporting that the ACLU estimates less than half of children younger than 5 who were separated will be reunited with their parents by today's deadline.

"The U.S. immigration officers told me that they would be taking my son from me," Mirian's letter states, as it's read by one famous face after another. "They said he would be going to one place, and I would be going to another... The immigration officers [placed my son] in a car seat in the vehicle. I asked why the officers were separating my son from me. They did not provide any reason... My son was crying as they slammed the door shut; I was crying too."

With Mirian's story trending on social media — the hashtag, #MyNameIsMirian attached the video — Hollywood is definitely doing its part to bring awareness to the fact that for thousands of people in the U.S. government's custody, their attempt at immigrating has become a horror story, with no definite answers of when, and perhaps if, they will see their loved ones again.

The situation is incredibly upsetting for any parent to imagine, but luckily, as The New York Times reported, the Trump administration has lost in federal court in an attempt to secure the long-term detention of migrant families. Instead, Judge Dolly M. Gee of the Federal District Court in Los Angeles held that there was no basis to amend a longstanding decree that requires children to be released to licensed care programs within 20 days, according to The New York Times. The government had argued that long-term confinement was the only way to avoid separating families when parents were detained on criminal charges, the publication explained.

As authorities struggle to undo their earlier work by reuniting kids with their parents — some of whom are separated by long distances at different facilities across the country — tools such as DNA testing are only making the process longer, as reported by The Washington Post. And in some cases, parents have reportedly been deported as their kids remain in the United States, in detention centers, according to CNN.

But we can all do our part to put aside politics and take a cue from engaged celebrities like Mira Sorvino, Lena Dunham, as well as former political families including the Bushes (Laura Bush called the Trump's family-separation policy "cruel and immoral" in The Washington Post last month) in keeping abreast of the news.

Most importantly, we can find ways to help, both big and small, from donating food or blankets to marching. We can impress upon our own families the importance of the values that we would like to see our children model one day as adults. Because as the ACLU video reminds us, there is an actual human plight and very specific story behind every headline — and at the heart of all the battles in Washington.