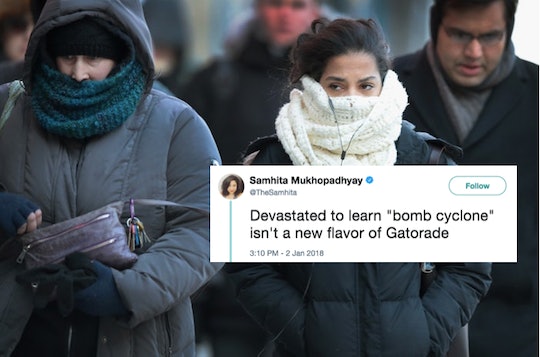 Now that the holiday season is officially over, winter has settled in, and there aren't any presents under the tree or candles in the window to remind you that celebrations are in store. Instead, it's just cold. And with the news of a serious winter storm on its way, these tweets about the "bomb cyclone" headed for the East Coast will help ease the pain of knowing that once and for all, winter is coming.

First, a monster storm will hammer coastal locations from Georgia to Maine with ice and snow. By Thursday, the exploding storm will, in many ways, resemble a winter hurricane, battering easternmost New England with potentially damaging winds in addition to blinding snow.

And it isn't just the description of the storm that has East Coasters freaking out. Oh no. The Washington Post has also reported that meteorologists are referring to the winter storm as a "bomb cyclone," most likely "because its pressure is predicted to fall so fast, an indicator of explosive strengthening," the publication reported.

So, considering the fact that this storm sounds like it's about to be pretty epic, it makes sense that the tweets about it would be equally so.

Obviously, if you live on the East Coast, learning about the storm couldn't be exactly pleasant. I mean, it's hard enough to get out of bed on a normal winter's day. But add in the now infamous "bomb cyclone," and it would make sense for people's reactions to be somewhat stunned.

Fortunately for the internet, people can still manage to have a sense of humor about the weather. Which, when you think about it, is pretty incredible.

Obviously, people in New York and other East Coast cities are quite used to fierce winter weather and getting ready for a possible blizzard. But as The New York Post reported that "the winter storm is expected to be so strong because of the rapid drop in pressure and the hurricane-force winds," it's understandable that people would be a little frustrated at having to deal with such an intense storm right at the beginning of the year.

Obviously, the phrase "bomb cyclone" has many concerned, but it also is totally legit. According to Business Insider, "In order to qualify as a 'bomb,' at least according to the National Oceanic and Atmospheric Administration (NOAA), a low-pressure system must experience a pressure drop of at least 24 millibars in 24 hours."

So, while it may seem like weather forecasters are being a bit dramatic, that isn't the case. In fact, qualifying the storm as a "bomb," could end up helping people better prepare for it. But that's not all. At the end of the day, as funny as some of the tweets about the "bomb cyclone" are, there are a few that make one very important point.

As Scary As It Is, This Storm Could Be A Turning Point

While many like to deny that climate change is real, scientists and much of the general public alike are confident that it is, and that a lot of the extreme weather conditions happening all over the world are because of it.

Really, though, this storm might not be so funny when it hits. If you're on the East Coast, stay safe, stay warm, and stay prepared!