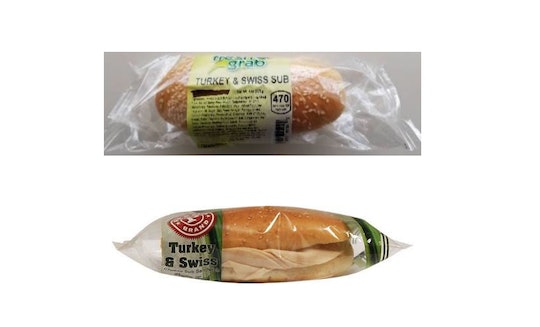 In the midst of a busy schedule, the grab-and-go sandwiches sold at grocery and convenience stores can be a real savior. They’re ready-made, healthier than a bag of chips or candy, and usually pretty tasty. But right now, you'll want to have an extra close look at your midday snack, since the Food and Drug Administration has reported that some grab-and-go sandwiches have been voluntarily recalled in 11 states due to a concern over listeria contamination.

The affected sandwiches are produced by Lipari Foods LLC and are sold under their labels Premo Brand and Fresh Grab, according to Fox 13 News in Memphis. The company's Turkey & Swiss Sub sandwiches were packaged by JLM, a sister company to Lipari Foods, the station reported. The sandwiches affected by the recall were produced on July 17, 2018 and sent out to stores in 11 states, according to the FDA: Florida, Illinois, Indiana, Kentucky, Michigan, Minnesota, Ohio, Pennsylvania, Tennessee, Wisconsin, and West Virginia.

According to the FDA, no illnesses have been reported so far in relation to the recalled food items and consumers who purchased any affected sandwiches recently can look for some simple information to help you figure out if you need to be concerned. Sandwiches included in this recall will have a sell-by date of Aug. 6, 2018, and carries UPC number 612510001042, according to the FDA.

These products should not be eaten and can either be thrown away or returned to where they were purchased. If you have any other questions, consumers can call Lipari at 800-729-3354 from 8:15 a.m. to 4:30 p.m. EST Monday through Friday.

Listeria can cause symptoms including high fever, stiffness, nausea, severe headache, diarrhea, and abdominal pain, according to the FDA. It is of particular concern to young children, the elderly, and people with weak immune systems, for whom it can cause severe, or even fatal infection, the FDA noted. Pregnant women are also at high-risk, as the bacteria can cause miscarriage, stillbirth, or preterm labor, according to the Centers for Disease Control and Prevention, which also noted that pregnant women are about 10 times more likely to contract a listeria infection than the general population.

The Mayo Clinic advises that if someone suspects they’re ill from eating listeria contaminated food they contact their doctor immediately. If symptoms like a high fever, severe headache, stiff neck, light sensitivity, or confusion develop, be sure to seek emergency care.

While consumer recalls like this are always of high concern, listeria contamination is something that always needs to be considered when preparing food. The bacteria is unique among germs that cause what we call food poisoning, because it can live — and even multiply — in the cool temperatures of the refrigerator, according to the FDA. Prevention techniques are pretty simple, according to the FDA's recommendations, such as wrapping up foods before placing them in the refrigerator to avoid cross-contamination and using pre-cooked and ready-to-eat foods as soon as possible.

Thankfully this voluntary recall is being instituted out of “an abundance of caution,” according to the FDA, so hopefully no cases of illness will result. But if you’ve purchased one of these sandwiches, be sure to follow the guidance to discard it or return it to the store.

More Like This
This Map Illustrates Just How Many States Would Ban Abortion If Roe V. Wade Is Overturned
Janet Jackson's Son Eissa Is A Little Musical Prodigy In The Making
Princess Charlotte Got So Excited To Shake A Royal Fan's Hand
Viral TikTok Breaks Down How Beautifully Bluey Depicts One Character’s Infertility