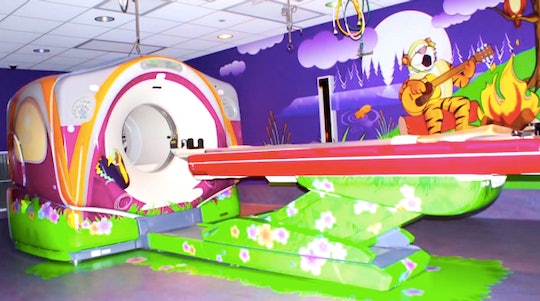 It's no secret that getting an MRI, PET scan, or CAT scan is not the most fun experience in the world. I certainly haven't enjoyed the couple of times I needed to get medical scans done, anyway. But to a kid, getting one of these scans done can be downright scary. But now there are kid-friendly image scanners that will make getting an MRI or CAT scan so much easier. And frankly, even though they're designed to put kids at ease, I wouldn't mind getting a scan in one of the machines myself.

If you haven't had the misfortune of getting an MRI, PET, or CAT scan done, allow me to explain. An MRI scan, or magnetic resonance imaging, "uses a large magnet and radio waves to look at organs and structures inside your body," according to MedlinePlus and the United States National Library of Medicine. They are especially useful for examining the brain and spinal cord.

A CAT scan, or computerized tomography (CT) scan, combines several X-ray images taken from different angles to create "cross-sectional images" of the "bones, blood vessels, and soft tissues" in the body, according to the Mayo Clinic.

Last but not least, a PET (positron emission tomography) scan uses an injection of a small amount of a radioactive substance that your organs and tissues pick up to create images on a scan showing where there's more "energy," according to Cancer.net. Cancer cells, for instance, can pick up a lot of the substance that then shows up on the scan, as those cells usually use more energy than healthy cells.

OK, now that we've got that out of the way, the main thing you need to know about these tests is that they all involve a "tunnel-shaped machine" in some way that you have to lie down and get scanned in. They can be loud and intimidating to adults. Now imagine what that would be like for a small child.

But thanks to the new Adventure Series medical scanners, the whole process might be just a little less frightening for kids. They come in several different themes, including a "space voyage" MRI version, according to POPSUGAR.

In that particular version, the idea is that kids are entering a "spaceship," and they're told it's going into hyper-drive when the machine starts getting loud. See, when I got medical scans done, no one told me I was in a spaceship, and even if I'm old enough that I would have known the truth, it might have at least added some much-needed levity to the situation.

The other options sound great, too. One children’s hospital in San Francisco, California has a cable car designed room, according to Babble. And at Children’s Hospital of Pittsburgh, the CT scan is designed with a pirate adventure theme, the site notes.

Thanks to the new MRI redesign, during a pilot program, the number of pediatric patients that needed to be sedated was reduced dramatically, according to Slate. Additionally, patient satisfaction scores went up 90 percent.

That's the good news. The bad news is, the "Adventure Series" designs can cost anywhere from $50,000 to $100,000 for each “room,” Babble reported. So it's definitely not a cheap option for hospitals.

But some of those costs might be made up in other areas, like those same hospitals not having to sedate young patients as much. In particular, fewer MRI or CAT scan machines might be needed if kids remain calm and each machine can be used more efficiently, too.

For Doug Dietz, a medical industrial engineer for GE Healthcare behind the "Adventure Series" machines, it all comes down to making the process less terrifying for kids. In a press release on GE Healthcare's website, he said he was inspired to create something more pleasant for children when he saw how scared one little girl was to get a scan done. In the statement, Dietz said:

I see this young family coming down the hallway and I can tell as they get closer that the little girl is weeping. As they get even closer to me, I notice the father leans down and just goes "remember we talked about this, you can be brave."

After he realized how frightened the whole thing must have been through her eyes, Dietz had a wake-up call. And the rest is history.

Thanks to these machines, getting medical scans done should be slightly less scary for kids everywhere. And I'm just saying, if they want to offer something a little more interactive and less intimidating for adults too, some of us would really appreciate it.