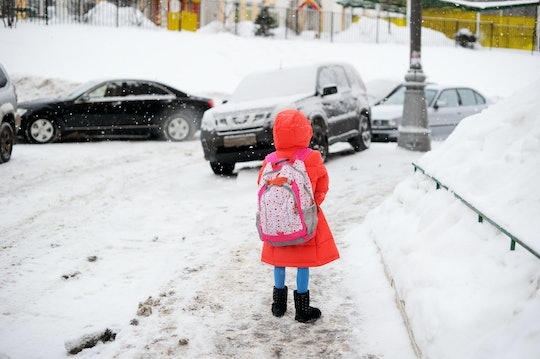 Kids Are Now Freezing In 30-Degree Classrooms. Here’s How You Can Help Them.

In the midst of intense cold and a major snowstorm along the East Coast, a lot of school districts had to make the call on whether to close schools on Wednesday, Thursday, and Friday. But some public schools in Baltimore did not close, and heating systems were unable to keep up with the demands of the cold weather. As a result, many students apparently had to bundle up just to keep warm in their own classrooms, and photos of the kids spread like wildfire online. Concerned strangers are worried about students going to school in classrooms without heat, and wondering how they can help. As it turns out, one solution started making the rounds on Twitter on Wednesday, and it involves GoFundMe.

The Baltimore school system closed four schools and dismissed students early at two schools on Wednesday, and on Thursday it closed all schools thanks to dangerously low temperatures citywide, according to CNN. But the systemwide closures apparently came only after outcry from parents and a teacher's union over heating issues that left students shivering in their classrooms.

Some classroom thermometers dropped to temperatures in the 30s and 40s, according to The Baltimore Sun. Politicians blamed burst pipes and broken boilers for the cold conditions, and they demanded immediate repairs. But in the meantime, one GoFundMe campaign is working to raise money for space heaters and outerwear for kids who might have to attend school even if the building heating systems are not up to the task of dealing with chilly weather.

Aaron Maybin, an "Art-Activist" on Twitter who is also a former NFL player and a current teacher in Baltimore, tweeted a link to a GoFundMe on Wednesday that is dedicated to raising money to purchase space heaters and outerwear to help students stay warm in Baltimore schools. $20,000 will reportedly be enough to "purchase roughly 600 space heaters, outerwear, and it will cover the processing fee for Go Fund Me," according to the fundraiser.

Maybin and other teachers in the district, who are behind the GoFundMe, also organized a drive to take donations of winter-ready clothing for the kids. The "story" section of the fundraiser reads:

Schools are also in need of hats, gloves, coats, socks,etc. for their students so if you would like to donate what you have, please contact us via email. We now have official designated locations and are trying our best to correspond with those who asked about dropping off!!

Maybin and the other teachers are in contact with people in the school system to be sure the donated heaters will fit the facility standards for any schools that will receive them.

And though it's an absolute shame that the campaign is even necessary in the first place, it's a really inspiring thing that these teachers saw the need to help these kids and did something about it, immediately. No waiting around for politicians or money or repairs. Just help for these students, as soon as possible.

Baltimore City Public Schools CEO Sonja Santelises said in a Facebook Live video that about 60 schools — around one-third of the school system — reported heating issues during the school day on Wednesday, according to CNN. She claimed that maintenance teams fixed many of the issues that day. Santelises went on to say:

Nobody in this city, including me, wants folks sitting around in coats and mittens all day.

But unfortunately, that's exactly what a lot of students ended up doing, according to videos and photos that went viral on social media.

If you're interested in donating to the GoFundMe fundraiser to help kids in Baltimore who don't have heat in their classrooms, here's where you can go to donate.

As aforementioned, the teachers also organized a way for people to donate winter clothes for the students who might not have them. Here’s one address where you can take donations of winter clothing:

And the GoFundMe campaign reported that people can email bmorecommunity18@gmail.com for more drop off locations.

Kids shouldn't have to worry about whether they will be able to learn in a safe, warm environment. But the reality is, some of these students didn't have heat in their classrooms during bitter cold winter weather, and their teachers want to do something about that. At least with this GoFundMe campaign, people can try to help with the immediate problem of students in Baltimore schools not being warm and comfortable while they learn, which is the minimum of what these kids deserve.

More Like This
'Squid Game' Is Coming Back For Season 2 On Netflix: Here’s What Parents Need To Know
Viral TikTok Breaks Down How Beautifully Bluey Depicts One Character’s Infertility
This Reddit Post About Two Sisters In A Fight Over Breast Milk Is Complicated & So Sad
Reddit Is Not Impressed With Dad Who Hid Neighbor's Gnome Because It Scared His Kid