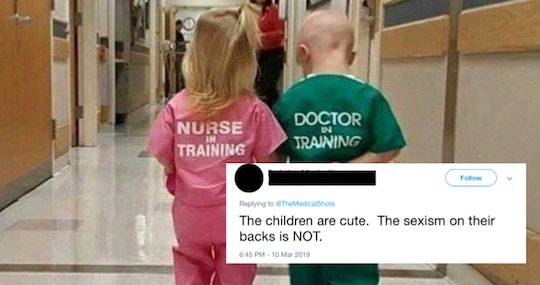 Twitter Is Angry Over This Photo Of Kids In Scrubs

Another day, another twitter-verse controversy. This time it's not Trump, the Kardashians, or even Miley Cyrus who is making waves. It's a photo of two toddlers, assumed to be a boy and girl, dressed in scrubs and walking the hallways of a local hospital. One is in pink, one is in green. One wants to be a doctor, the other a nurse. Guess, who's who. These kids in nurse-in-training and doctor-in-training scrubs are infuriating the internet.

Medical Shots, a twitter account with 213k followers that posts health-related content, posted the pic today. In the photo, one child is dressed in pink with 'future nurse' on her back and the other child is wearing green with the words 'future doctor' on his back.

The caption reads: "This is cute, isn't it?" with a heart eyes emoji.

So far, it's received over 2.3k comments, 17k likes, and 4.1k retweets. It seems to have definitely hit a nerve — not a funny bone — for many on the internet.

People were quick to express their concerns and point out that the image is an example of blatant sexism, which might even be offensive to some.

First off, there are lots of male nurses and plenty of female doctors and nurse shouldn't be a gendered term, according to the New York Times.

Twitter user @Divveyfallfan commented and stood up for himself and others saying, "Nope, male nurse here!"

Another user did the same, "My brother is also a nurse and a fantastic one at that."

Yet another posted on behalf of their brother, "Same! My brother is a “murse” and he’s the absolute best! PS: The doctors in our family are women."

But one can argue that murse shouldn't be used either as it's only enforcing the gender stereotype.

Overall, people simply didn't like what the photo represented.

"The children are cute. The sexism on their backs is NOT," added another Twitter user.

And the corrected image by twitter user @angg_fn is on point. He suggests we call them what they both really are, health professionals, a name that comes without the gender stereotypes.

Then user @GammaCounter, took it one step further making the image in black and white so there was no more pink associated with the girl's outfit.

And the memes came fast and furious in response to this contentious tweet.

While most of the response was overwhelmingly against the image, there were a few that thought people were simply overthinking it.