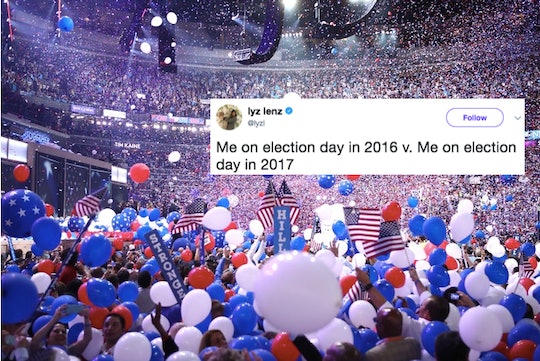 On Election Day 2016, I bopped out of my polling place and skipped down the sidewalk with my "I voted" sticker gleaming. I was all smiles as I called my 96-year-old grandma so we could celebrate the imminent election of the nation's first woman president. But now, a year later, my grandma often disgustedly laments everything — from President Donald Trump's proposed Muslim ban to the dishonesty of the "creeps" in his administration when I call her. And I'm the who feels like they're about to be 100 years old. And so much of the bereaved electorate is right there with me, as the memes comparing Election Day 2016 and 2017 that are currently taking over the internet show.

The crushing disappointment of the outcome of last year's presidential election has left a deep, exhausted, and defeated wound in many of us. In fact, the past year has left many feeling as though they've survived 365 days in an ever-deteriorating dystopia. You know with the Trump administration's attacks on reproductive health and trans military service members, the feeling that nuclear war could strike at any time, and lurking suspicions that Trump's campaign may have colluded with Russia.

So, as some Americans have made their way to the polls to cast their ballots for their state and local elections this Election Day, this "feeling " of exhaustion and frustration definitely shows — big time. In real life, of course, but most readily in these memes.

"Me on election day in 2016 v. Me on election day in 2017," Lenz tweeted, and the accompanying photos of Sigourney Weaver perfectly sum up the dramatic deterioration of much of the country's mental states and trust in the government over the past year. In one photo, a Working Girl Weaver looks bright and professional. But in the Alien version of herself, she's filthy, wielding a gun and looking desperate.

And so a true meme phenomenon was born, with Twitter users far and wide using side-by-side images, mostly of celebrities and movie characters, to really demonstrate physical, mental, and emotional hardship that the past year of a Trump in the White House has wrought.

Judging by the memes (which is, as always, the best way to judge anything and everything), this past year has been pretty brutal. It's left a bunch of hardened, skeptical, cynical, voters incapable or trusting. It's left them fighting for their lives (and that's not an exaggeration — just consider what the Republican controlled House and Senate tried to do to people with pre-existing conditions with their now-defeated zombie-esque health care bills that kept coming back to life for months).

What's perhaps most disturbing about the elections in 2017 is how similar they are to 2016. According to NPR, the Republican candidates in the two most consequential races of the day — those for the governorships of New Jersey and Virginia — have adopted Trump's signature fear-mongering, scapegoating, and race baiting into their campaign messaging. Virginia candidate Ed Gillespie, for example, sought through campaign ads to characterize his Democratic opponent as sympathetic to the Central American criminal gang MS-13, NPR reported. Trump had previously tried to stoke fear about the gang's ravaging the country among Americans — a position that proved to be unfounded, according to The Washington Post.

So, it's vital that everybody posting "me on Election Day" memes get out and vote. That way, perhaps the Election Day comparison memes of years to come will be a bit less despairing. But, as these memes indicate, there's really not much farther to fall.