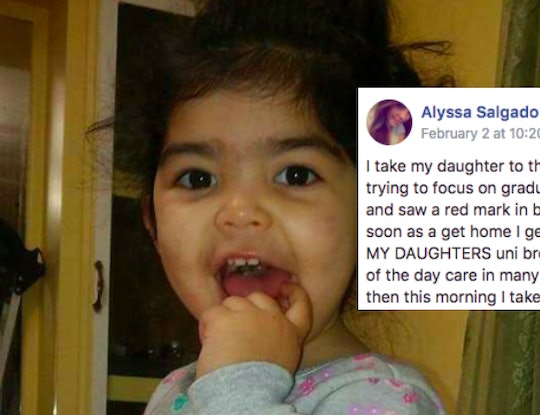 It's one of the stranger stories that's come out in 2018: not one, but two moms have claimed their toddlers' eyebrows were waxed at a Tri-Cities daycare, and their bizarre stories are — understandably — going viral on social media. The state is currently looking into the two mothers' allegations against the Boys & Girls Club of Benton and Franklin Counties, according to The Tri-City Herald.

Romper's request for comment from the Washington State Department of Early Learning, which licenses daycare institutions in the state, was not immediately returned. However, Frank Ordway, the department’s assistant director, told The Tri-City Herald that the claims were unusual. The Boys & Girls Club of Benton and Franklin Counties told Romper that it had concluded its internal investigation and found the claims to be "unsubstantiated."

Moms Alyssa Salgado and Glenda Maria Cruz both posted their daycare stories on Facebook, sharing pictures of their children before and after the alleged incidents. "I go pick up my daughter yesterday and saw a red mark in between her eye brows," Salgado wrote on Facebook, in a post that's now been shared upward of 21,000 times. "I think it's a scratch but as soon as a get home I get a closer look these WOMEN decided to WAX MY DAUGHTERS uni brow [sic]."

Cruz alleged the same thing happened to her son, writing on Facebook, "I never thought something like these would or could of happend [sic] to my son."

The Boys & Girls Club New Horizons Nursery is a daycare that's part of the New Horizons High School campus in Pasco, Washington, and it provides childcare for teen parents who are continuing their studies on campus. It hasn't had any valid complaints filed against it since its most recent license was issued in 2012, the Department of Early Learning told The Tri-City Herald, though the department's investigation into the allegations is reportedly ongoing.

After conducting staff interviews, reviewing documentation and inspecting the physical environment, the Boys & Girls Club has found these accusations to be unsubstantiated. The results of the internal fact-finding have been submitted to the state investigation team for consideration in its report. The Boys & Girls Club has as its primary concern the safety and well-being of the young people it serves.

Salgado wrote in her Facebook post that she refused to let the alleged incident go unnoticed. "I want justice for my daughter and I'm not letting this be swept underneath the rug," Salgado tells Romper. On Facebook, she added an update for those following the story, writing:

there is a statement being released by Boys and Girls Club pretty much stating that the allegations are not true but I know that it's true ... I'm not going to be silenced I am going to be my daughter's voice and just as somebody told me give him a voice to the voiceless I'm going to keep fighting and I'm going to bat for my daughter because she didn't deserve that.

Romper reached out to Cruz as well, but did not hear back immediately. However, both moms' stories clearly resonated with readers on social media, with their posts receiving hundreds of outraged comments and thousands of shares between them.

Ordway told The Tri-City Herald that the Department of Early Learning's investigations generally take a month or two months to complete, so it will likely be a while before this incident is laid to rest. Either way, the stories are disturbing, and parents who use the daycare are likely looking forward to a resolution.