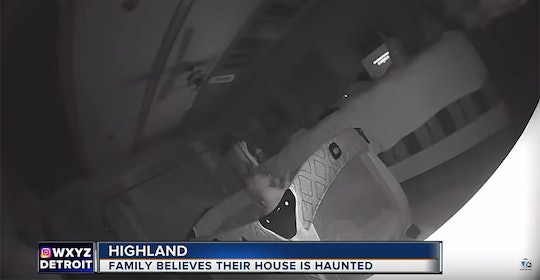 Um, These Parents Believe A "Ghost" Scratched Their Baby & The Video Is Very Creepy

Even if you're not a believer in paranormal activity or the afterlife, there's a good chance you'll want to know more about these parents who believe their baby was scratched by a ghost. Although this story might sound like some sort of hoax or social media scheme, the creepy video evidence suggests something seriously spooky is going on inside their home. Get ready to feel goosebumps, folks.

Nanny cams have inadvertently caught many sweet and heartwarming moments throughout the years, like that viral video of golden retrievers helping a toddler break out of her crib. But, as The Mercury News reported, one baby monitor in Highland, Michigan recorded something that's anything but cute and fun — I'm talking footage of a supposed "ghost" scratching an infant.

Here's what's going on: Parents Joshua Higgins, 30, and Heather Brough, 25, recently became alarmed when they noticed "purple scratches” on their 15-month-old daughter’s cheek, according to People. Perplexed and concerned by these injuries, the couple decided to check their nanny cam for a possible explanation. As for what they found? The video showed a blurry figure walking right past their child's crib. Eek.

What's especially frightening about the video is that Higgins and Brough's daughter, Lily, seemed to register that something was in her room. As the figure walks by, Lily stands up in her crib and looks curiously around her bedroom. "It’s almost like she sees something that we don’t," Brough told WXYZ-TV Detroit about the creepy footage.

"It was chilling," Joshua told the news outlet. "It was literally a chill down your spin, like that 'what if' factor — Is this what I just saw?"

In addition to the freaky video, Borough said she and Higgins have woken up to the sound of an "angry male voice" in their home more than once before.

"There have been times where me and my fiance would wake up in the morning and I would hear an angry male voice — like someone had stubbed their toe," she shared, according to the Daily Mail.

Freaked out by the seemingly bizarre events in their home as of late, the parents decided to hire a paranormal investigator to look into the situation. According to ABC News, the investigator told the parents that their property — a guest house that's attached to a larger home — is haunted. Say what, now?

As for who is supposedly haunting their house, Higgins' father, Jim Higgins, thinks the culprit is a previous tenant. "The gentleman that lived here originally committed suicide apparently by jumping out this window, which is one story down," he told WXYZ-TV Detroit.

Higgins' mother, however, believes the spirit could be an older woman who once owned the property. “I was told when we bought the houses 11 years ago the lady who owned the property died in the main house," she said, according to People. "It’s an old farmhouse and according to her niece … she fell down the stairs, broke her hips and laid there for a very long time before she passed away."

Um, is anyone else feeling spooked right now? These theories about who the "ghost" could be are chilling.

Of course, another possibility here is that Lily scratched herself, a common phenomenon in young kids. But Brough claims Lily's hands did "not match up" with the concerning scratches. Hmm.

Brough and Higgins plan to move as soon as they can afford it, they told WXYZ-TV Detroit. Until then, the entire family is sleeping in one room together.

I'm not sure if I'm fully aboard the ghost train (the "figure" could be car headlights, as one user on Twitter suggested), but I do think the video is creepy. My advice? The couple should look into saging their house ASAP.