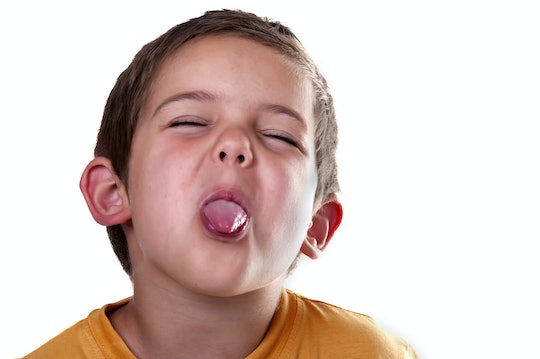 Pretty much everybody is familiar with the pervasive line of thinking that says boys are naturally more suited to outperform girls when it comes to math and science. It's an assumption so ingrained in our society that many believe it as fact, the result of a natural, irreversible difference between the sexes. And now, three researchers have added their voices to the din, claiming that boys are better at physics for the most ridiculous reason. In an article published last week, the Australian researchers hypothesize that boys outperform girls on science tests because the way they pee gives them an edge when it comes to understanding concepts related to projectile motion.

Yep, you read that right. The authors of the article, which was published in the Times Education Supplement last week, don't cite a study they conducted or any actual data. Instead, they spitball that boys' "playful urination practices" such as "seeing how high you can pee to games such as Peeball (where men compete using their urine to destroy a ball placed in a urinal)" set them up to score higher than their female peers on tests. They realize that the assertion may lead some to think they're "daft," but Anna Wilson of Abertag University and Kate Wilson and David Low of the University of New South Wales Canberra persist nonetheless.

It is of course a little possible that the trio may be on to something, but that's a long shot (or a long stream?). Could boys' reported obsession with peeing all over the place really set them up for a more successful career in STEM fields, which men do dominate? Wilson, Wilson, and Low insist that they're "making a serious point" with their claims, as they wrote in their Times Education Supplement piece:

This self-directed, hands-on, intrinsically (and sometimes extrinsically, and socially) rewarding activity must have a huge potential contribution to learning, resulting in a deep, embodied, material knowledge of projectile motion that’s simply not accessible to girls.

They describe in their paper boys' and men's propensity to play around with their pees using only anecdotes ("YouTube videos explain how to write your name in the snow with your pee"). But without empirical evidence, it's impossible to prove this theory — and Wilson, Wilson, and Low do also offer some more generally accepted explanations for why boys sometimes outperform girls in science: that society associates "logical and mathematical ways of thinking" with masculinity and that some parents or teachers may inadvertently discourage girls from pursuing success in STEM subjects.

That second theory rings true for Jo Boaler, a Stanford professor of mathematics. She told CNN last year that parents' attitudes toward math can drive their daughter away from it, even if that's not their intended outcome at all:

Many parents believe you can either do math or you can't and they'll say to their kids, 'Oh, you've got the math gene.' Or they tell them they don't have it. We know that when mothers tell their daughters "I wasn't good at math in school," their daughter's achievement goes down.

Boaler believes that the idea of a "math person" is a myth. She also thinks that students' outcomes will improve if they think they have the potential to do well in math. Recently, she she hosted a summer camp for incoming seventh graders at Stanford where she put those beliefs to the test, CNN reported. Each of the kids came into the 18-day camp believing that math wasn't for them, but they spent its duration learning that their brains can evolve. The result? Their test scores improved by an average of 1.6 years of schooling.

The moral of the story? No girl — or any other student — should ever be told that they're simply not inclined to excel at math or science. Because, no matter how they pee, that's simply not true.