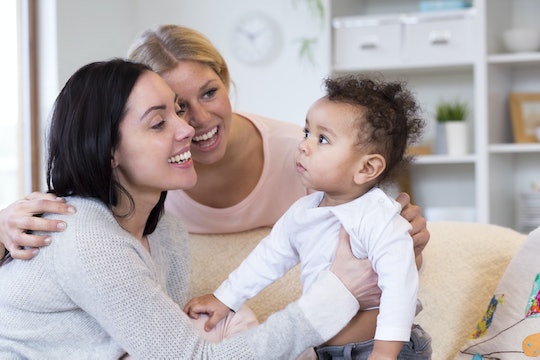 Just before the weekend last week, Georgia lawmakers passed a bill that would allow government-backed adoption agencies to deny placing a child with parents whose values they don't believe in, whether they're single parents, unmarried, or identify as LGBTQ. As backwards as that sounds, there are a handful of other states that reportedly ban LGBTQ couples from adopting in the name of religious freedom, as ThinkProgress reported.

If the Georgia bill, which passed its state legislature in a 35-19 vote, according to The Hill, is signed into law, the state would join Texas, Alabama, Mississippi, Virginia, Michigan, and North and South Dakota as states who allow children to not be placed in loving, healthy homes simply because a government agency doesn't believe in the "lifestyle" or sexual orientation of an adoptive family, as WRAL-TV reported.

Based on the wording of the bill, agencies could also theoretically decline to place a transgender kid in a foster or adoption agency. The bill reads that it would allow a "child-placing agency to decline to accept a referral from the department and decline to perform services not referred under a contract with the department based on the child-placing agency's sincerely held religious beliefs." Or if it did decide to place a transgender child, there's the risk that the foster or adoptive parents wouldn't believe in the child's gender identity or sexual orientation. The wording of the bill makes a lot of room for some dangerous interpretations by these religiously affiliated child-placing agencies.

The bill in Georgia is called the “Keep Faith in Adoption and Foster Care Act" and was sponsored by state Sen. William Ligon who said, according to the Associated Press, "Just because you are a faith-based organization, doesn’t mean you have to check your faith at the door and cannot participate in government programs." He added, according to ThinkProgress, that the bill doesn't prevent anyone from adopting. Just that adoption agencies who receive government funding can't be punished if they refuse to place a child. So it's state-sanctioned discrimination.

Basically, it's a bill protecting people who don't really need protection. Religious organizations aren't being persecuted by any means when they're asked to place a transgender kid with a family or give a lesbian couple the option to foster a child. If anything, placing LGBTQ kids with families seems like the Christian thing to do, especially given the research on how discrimination affects LGBTQ youth when it comes to their mental health, substance abuse issues, and homelessness.

Likewise, an LGBTQ couple who wants to adopt might also have some "faith," proving that the bills are not meant to protect or encourage family values, but straight up discriminate against already marginalized and unprotected families.

The Georgia bill, much like ones in other states, would also allow religious organizations to deny adoption based on any "sincerely held religious view," which means single parents, people who have used birth control or had an adoption, or people of a different religion could also be denied foster care or adoption rights. With a "sincerely held religious view" so loosely defined in the laws, it's easy to imagine other people barred from adoption and foster care, too.

Democrat Sen. Nan Orrock said, according to WRAL-TV, "This proposition that we should ... protect agencies that are gonna deny loving families the opportunity to adopt a child from our foster care system is just backward on its face."

She added, according to Project Q, an LGBTQ news outlet, "Gay people also practice in faith communities, also have religious beliefs. The aspersions cast that a same-sex couple can not constitute a faith-based family — what are we saying here? What kind of belief is that?"

"It sends the message that the State of Georgia thinks it is perfectly OK to discriminate. It is a slap in the face to same-sex couples who would consider adoption," she added.

Although LGBTQ adoption bans have been challenged in the courts, especially since the Supreme Court ruling on same-sex marriage came down in 2015, these discriminatory types of bills that try to pass as "religious freedom" protections are becoming all the more common, as evidenced by a number of moves from the Trump administration and some cases currently being heard by the Supreme Court.

This year, as Politico reported, the Supreme Court will rule on a case in which a baker refused to make a wedding cake for a gay couple. The Trump administration, as The New York Times reported, has already rolled back the Affordable Care Act mandate that required every employer to cover birth control for women. Now, companies can refuse to include contraceptives in their plans if they feel it goes against their religious beliefs. A bill in committee in Oklahoma would allow religious organizations to deny LGBTQ people the right to adopt and even access health care, according to Human Rights Watch.

At the heart of these states' bans on LGBTQ adoptions, or laws allowing private companies to openly discriminate against people, is a hatred for LGBTQ people or anyone who defies some idea some religious senator has about what a family should like.

Yet, the religious right insists that their way is the best way, despite the fact that religion really has no place in politics or government-funded programs to begin with. Even though these "religious freedom laws" only hurt LGBTQ people, according to the Human Rights Watch, which concluded in a report earlier this month:

In fact, with few exceptions, the laws as drafted create blanket exemptions for religious believers to discriminate with no consideration of or even mechanism for consideration of the harms and burdens on others. The failure of most states to enact nondiscrimination protections and the growing number of religious exemption laws leave many LGBT people with little recourse when they encounter discrimination.

The Georgia bill still has to be signed by the governor, so it's not set in stone yet. Hopefully, people and companies will be able to successfully show the state's legislature that these discriminatory laws aren't good for business, as they did in the face of North Carolina's transgender bathroom bans last year, as Fortune reported. Because any law that legalizes hate and keeps kids from being placed in a safe, permanent family just isn't the right thing to do.