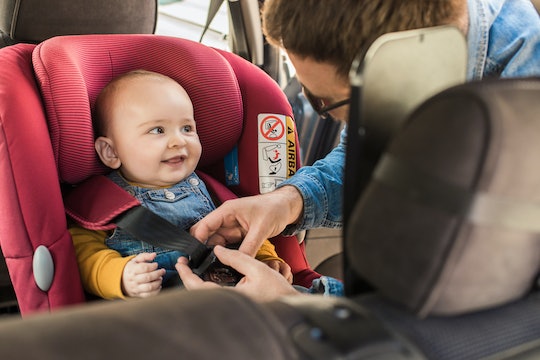 These States Have The Best Car Seat Laws In The US

Every new parent knows that their baby has to be put in a car seat. They protect newborns and toddlers from the simple dangers of being on the road. But some parents might not know that car seat laws vary from state to state. Although it is common sense to put your kid in a car seat, some states have some very specific laws when it comes to safety. Essentially, the tougher the law, the safer your kid will be. And these states with the best car seat laws prove that kids will be better protected on the road with these rules in place.

The American Academy of Pediatrics (AAP) does have general guidelines for how long parents should keep their child in a car seat. According to the AAP, infants and toddlers should be riding rear-facing until they are at least 2 years old and ride in a forward-facing seat with a harness for as long as their car seat allows. Children should continue using a booster seat from 8 through 12 years of age, and continue to sit in the back seat until they are older than 13.

Each state has an individual law for car seats and if parents don't follow these rules, they could be fined. But there are some states with stricter and more compliant car seat laws than others. If your state isn't mentioned below, it doesn't mean that your child is any less safe or in more danger. And this is not to say that you should move to these states immediately because they're "safer." However, it is important to know your state's car seat law and know how your child should be protected, according to the AAP guidelines.

Having your infant sit facing the back of the car is considered to be the safest position for a car seat to be in. With a child positioned this way in the car in their car seat, their head, neck, and spine are all being supported, according to the American Automobile Association (AAA), which distributes crash forces across the car seat.

But only a handful of states require parents to keep their children rear-facing until they're 2 years old. In 2011 the AAP changed its recommendation from keeping children rear-facing until they're 1 year old to 2 years of age — but only a certain amount of states changed their laws to reflect that. According to Governors Highway Safety Association, the following eight states have cracked down on that requirement:

Because they have this age limit set, their seat belt laws are much safer than others and have the best car seat laws.

Sitting backwards matters. Children in their second year of life are 75 percent less likely to die or be injured in a crash if they're in a rear-facing seat, according to Consumer Reports, which is why it is important for parents to keep their children facing the back of the car for so long.

Even when infants and toddlers outgrow their car seats, they still need protection. Booster seats are just as important as car seats, according to Parenting, because they save children from injuries by 45 percent. When children are in booster seats, it positions the seatbelt to work more effectively. But most states have booster seat laws in place.

In fact, 48 states, in addition to the District of Columbia and Puerto Rico, have booster seat laws in place, but the age range varies, according to the Governors Highway Safety Association. New Mexico and Wyoming should be noted for having safer booster seat laws, according to Autobytel, because the state requires children up to the age of 12 to wear a booster seat until their seatbelt fits properly. And the only states lacking booster seat laws are Florida and South Dakota, the site notes.