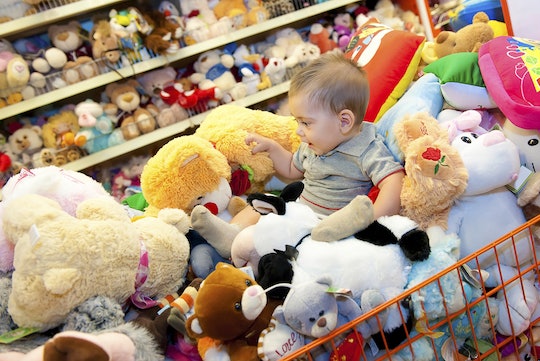 Millennials tend to be blamed for just about everything these days — from the global wine shortage to the death of the napkin industry (yes, I'm not kidding about that one) older generations love to point fingers at 20 and 30-somethings. If you Google "millennials" and "blame," you'll be treated to a ton of articles and think pieces lamenting the influence of pesky young people. And to be fair, millennials do have a significant impact on the economy — this is the largest generation in America, after all. One thing millennials can't be accused of ruining, however, is the toy industry. If you examine the stats on how much millennial parents spend on toys, you'll find that this generation is single-handedly saving the toy industry. Take that, Baby Boomers.

When Toys "R" Us announced it would be closing its stores after the 2017 holiday season, many people expressed little surprise at the news. For starters, millennials "shop more online than Generation X and Baby Boomers,'' according to Matt Townsend of Bloomberg News, and many parents prefer to do their toy shopping at bigger retailers like Amazon or Target.

This preference for online shopping, however, doesn't mean that people are buying fewer toys — it just means that millennial parents are reshaping how the industry works. And think about it: the easier and more convenient it is to shop, the more likely it is that people will spend greater amounts of money.

Throughout the past few years, surveys have found that millennials have consistently spent more money during the holidays than consumers aged 35 and older. As for millennial parents specifically, a 2016 survey from the Rubicon Project (an online advertising company) determined that younger parents spent more money on their kids than in previous years. Last holiday season, millennial parents were projected to spend an "average of $1,711 during the holidays" in total, and $495 dollars per child, according to TIME. These stats marked a 25 percent surge from the 2015 holiday season, a sign that millennial parents are shelling out cash on gifts and toys for their children at an increasing rate.

Furthermore, millennial parents are willing to spend a lot of money on digital toys that will help their children's development. According to Media Post, 65 percent of parents said they'd pay between $41-$60 dollars for a "smart" toy while 23 percent of parents said they'd spend "upwards to $80 or more for a connected toy." In fact, millennial parents are spending so much money on smart toys that Juniper Research predicts smart toy sales will "exceed" $15.5 billion dollars in revenue come 2022.

As for the parents that aren't taking part in the digital boom, they're spending their money on a little thing called nostalgia. As any true millennial knows, 20-somethings are somewhat obsessed with nostalgia, and it turns out parents from this generation will spend a lot of money to enjoy their favorite toys with their kids. In 2016, the toy company Hasbro saw a 19 percent increase in their third quarter sales after millennial parents bought a ton of nerf guns and Troll dolls, according to TheStreet.

Samantha Lomow, the senior VP of Hasbro Brands, said of the boost in sales, according to the finance website:

The nostalgia factor is certainly something that has led to the revitalization of the '90s movement. There is a joy in rediscovering the brands and toys that longstanding fans may have grown up with and the excitement in sharing that love with a new generation.

Of course, these statistics and market trends doesn't mean that all millennial parents are spending a lot of money on toys, or that most millennial parents are financially secure enough to drop a bunch of cash on lots of toys for their kids. These stats simply prove that the toy industry is alive and well, despite the closure of brick and mortar stores. Congratulations, millennials.

More Like This
Can The Baby Have That?
10 Of The Raddest Movies From The '90s To Watch On Girls Night
Princess Charlotte Got So Excited To Shake A Royal Fan's Hand
Janet Jackson's Son Eissa Is A Little Musical Prodigy In The Making