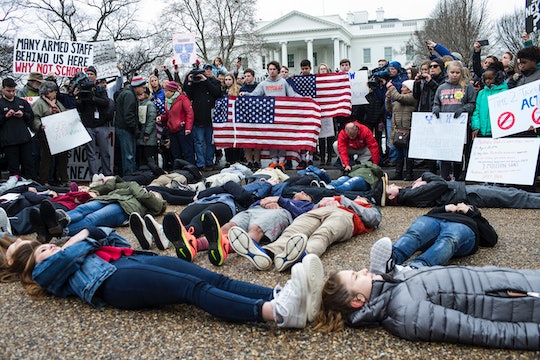 I've never believed that the children are our future as strongly as I have over the past few days. In the wake of the horrible school shooting in Parkland, Florida, students have been raising their voices like never before. And on Monday, high school students protested against gun violence in front of the White House, in a powerful "lie-in" meant to show the nation's leaders that something has to change.

On President's Day, Feb. 19, dozens of students lay down in front of the White House for three minutes, according to NBC 4, in order to urge Congress to pass laws to prevent more mass shootings. While Teens for Gun Reform, the group that organized the protest, had originally intended for only 17 people to lie down, to symbolize the number of victims at Marjory Stoneman Douglas High School, many more joined them in a show of solidarity. Teens For Gun Reform co-founder Eleanor Nuechterlein told The Cut that the three-minute time period was meant to symbolize how quickly one can buy a gun in some parts of America. At another point in the protest, the crowd chanted "Shame on you," while one teen held a sign reading, "Is Congress or the NRA making our laws?" and others held signs reading, "Am I next?"

Meanwhile, President Donald Trump spent the day at his golf club in Florida, according to the Miami Herald, only an hour away from where last week's shooting took place. The White House did not immediately respond to Romper's request for comment.

The Size Of The Crowd Kept Growing

Mass shootings have become a new normal in America. After every horrific event, it seems, the same thing happens. Those involved grieve, some people call for change, others say that "now is not the time to talk about gun control," and politicians send their "thoughts and prayers" without enacting any meaningful reform. Then, within a matter of weeks, the event fades from the public's awareness, only for the whole cycle to repeat a few months later when the next troubled lone shooter (usually a man, usually white) takes a legal weapon and sows widespread destruction. It's easy to grow cynical, and to believe that nothing can ever change, to let your motivating anger curdle into a heavy, all-consuming hopelessness.

I thought the same thing would happen this time around, but I was wrong. Because the Stoneman students started speaking out, in droves, with the kind of authority and righteous rage that only comes from having been exposed to something horrifying and preventable.

Now other teenagers across the country are adding their voices to the chorus. Monday's protest may have been small, but it was mighty. And soon, a much larger one will take place. A nationwide, student-led group called March For Our Lives is planning rallies against gun violence on March 24, set to take place throughout the United States. In a statement on its website, the group said:

Perhaps, this time, the nation can finally break the cycle of violence. And if so, we'll have teenagers like these to thank.