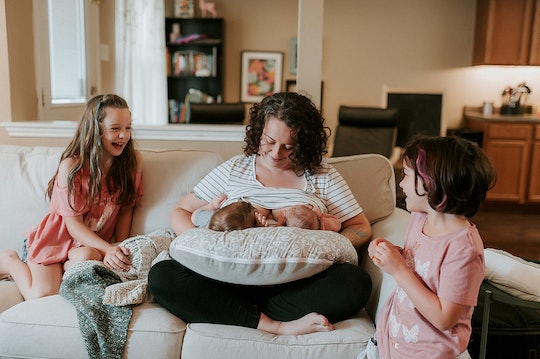 Breastfeeding stock photos are beautiful, but also famously ridiculous. They often show idealized breastfeeding scenarios — moms under rainbows in fields of wildflowers while doves ascend with no signs of cracked nipples or judgement stares of passersby. But as any breastfeeding mom can tell you, it's not all sunshine and rainbows. And these stunning breastfeeding photos are a collection of candid, honest shots that show how varied nursing experiences can be from one mom to the next.

The collection comes from the Facebook photography community Looks Like Film and represents its members’ most-liked breastfeeding images of the past year. The shots come from a variety of photographers, each of whom have captured a unique moment shared between mother and baby. And while these photos represent experiences that came naturally, not everyone was especially receptive of them outside of the group.

Photographer Yakaly Di Roma, a photographer featured on the site who wrote the blog post that accompanied the collection, explained that she has “received many negative and hurtful comments” after posting photos of herself breastfeeding elsewhere, according to HuffPost. "While it can be upsetting sometimes, I try not to let it get to me," she said. "I know I am doing the best for my boys, and I will continue to do so in spite of all the negativity.”

Looks Like Film aims to be exactly the kind of place where photos such as these can be explored out of the harsh light of the general public eye.

Lukas Piatek from Looks Like Film tells Romper that the often controversial nature of breastfeeding photos may be a part of why so many of the group's members were touched by the photos in the collection.

"In our photography community we try to normalize everything starting from birth to breastfeeding, images and topics that are pretty sensitive to many people around the world," Piatek says. "With creating blogposts and content we simply want to make people aware that these topics are one of the most natural things in our lives and shouldn’t be seen negative in any kind of way."

But aside from prompting discussions and prompting normalization, Piatek tells Romper that the beauty of the photos cannot be overstated. "Plus," he says, "most of these images are so pretty and beautiful and we simply want to show that."

Piatek went on to explain to Romper that, at their core, these photos "just show the vivid connection between a mother and her children."

Looks Like Film takes issue with the tendency to react in disgust to images of women breastfeeding. "Breastfeeding is something that most of us experience in our childhood as it is simply the way a child is meant to be nurtured by a mother," Piatek says. "This is why breastfeeding in public shouldn’t be a problem at all."

He continued, "There is nudity everywhere in our media and people complain because a mother is feeding her child. That shouldn’t be the norm. The photos express the connection, the love, the bond and the beautiful side of breastfeeding."

But that's not to say that Piatek — or Looks Like Film, for that matter — is ignorant to the pervasive negativity towards images of breastfeeding. These attitudes do exist, just not on their page.

"Our members are 99 percent positive about breastfeeding and birth images," Piatek tells Romper. "Our community is based in a Facebook group with over 50K members ... We specifically do not allow any negativity in the group for many reasons."

What are those reasons? A main one is to protect the group's members. But also, Piatek and his fellow administrators wish to squash any potential conflicts before they arise.

"Cutting out all the negativity results in a positive and safe environment for all types of photography and all levels of photographers," he says.

And if these precautions still don't sound secure enough, Piatek tells Romper that Looks Like Film also offers "a specific LLF Kids group with 10K members, where parents or mostly moms have a even more safer place to share photos and start discussions around photography related topics."

The best news of all: Piatek said that Looks Like Film "will be sharing more [breastfeeding photos] because we believe in empowering women and normalizing breastfeeding and birth. To see more of these amazing images, head over to Looks Like Film. You won't regret it.

More Like This
6 Ways To Fix A Shallow Latch So Your Baby Can Nurse Properly
Is It Safe to Take Ibuprofen While Breastfeeding?
Breastfeeding Twins: Everything You Need To Know
This Reddit Post About Two Sisters In A Fight Over Breast Milk Is Complicated & So Sad