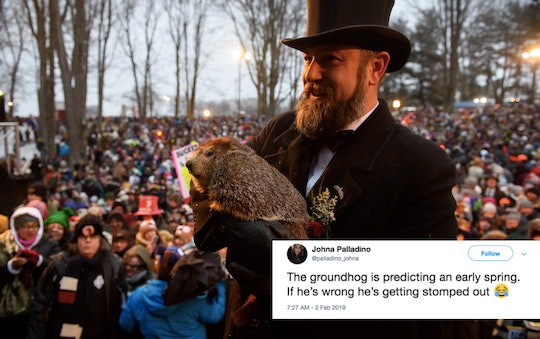 Well, it's Groundhog Day... again (thank you Bill Murray for one of the best movies ever). This year Groundhog Day feels a bit more important than in years past because so many of us are sort of freezing our baguettes off and really, desperately need winter to be over. Hence we turn every Feb. 2 to the rodent weatherman himself, Punxsutawney Phil from Pennsylvania. We wait to find out if he predicts an early spring or six more weeks of winter based on whether or not he sees his shadow. Well, if these tweets about Punxsutawney Phil's prediction are to be believed, it looks like we should maybe think twice about letting a groundhog predict the weather for us. He doesn't have the best track record, I guess.

On this cold Saturday morning at Gobbler's Knob, Pennsylvania, the world watched with baited breath to watch the drama unfold. Would Phil see his shadow or not? It's a pretty big deal in the area, a tradition that spans a full 130 years. And while groundhogs in the wild only live about six years, local lore has it that this particular groundhog drinks a magical elixir to stay alive in service to us humans as the "prognosticator of prognosticators." What did Phil have to tell us this year? Apparently he sees an early spring.

Faithful followers, there is no shadow of me and a beautiful spring it shall be.

Now before you go celebrating the good news and pulling out your sundresses and flip flops, hang on a second. It seems that Phil has a history of being wrong.

According to the National Oceanic and Atmospheric Administration, Phil has only been right 40 percent of the time. They also say that he has "no predictive skills" which sounds a little harsh to me but I get it. This year the weather stakes are high with the polar vortex kicking our collective butts.

And it seems the people of Twitter aren't sure what to think of Phil these days.

Some figured he would get it wrong and just didn't want to be bothered getting their hopes up for an early spring.

Some were aware they might be taking their chances putting their faith in Phil but hope springs eternal.

Then there are those who believe that Phil has not done an especially good job and needs to make room for a new groundhog.

No Phil's inner circle insists that he's been right 100 percent of the time, it's really the fault of the interpreter if his prediction is wrong (way to pass the buck Phil). A.J. Deureme, one of Phil's handlers, told 10 News:

Phil is the one deciding whether or not he's seen the shadow. It's not up to us. All we do is deliver his message.

All we can do this year is hope he's right. Because I don't know how much more we can take of this nonsense.