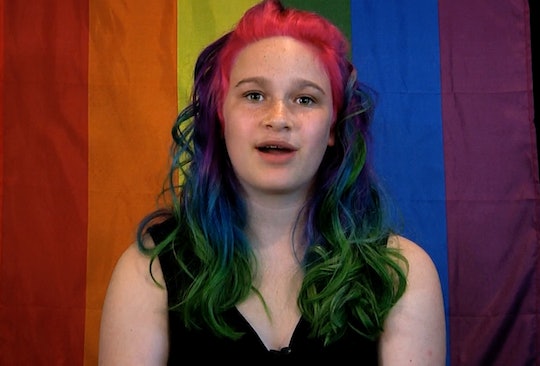 Last month, people all over the world came together at numerous Pride parades all over the world to celebrate the LGBTQ+ community. However, for many small town residents who want to participate in Pride, they have to travel to a neighboring city to take part in the festivities. For that reason, a 12-year-old is already planning a Pride parade in her hometown for next year, NBC News reported.

Molly Pinta, a seventh grader, lives in Buffalo Grove, Illinois. In June, she and her mother, Carolyn, attended the inaugural Pride parade in Aurora, Illinois, which is about an hour away from their hometown, according to Google Maps. Shortly after the Aurora Pride Parade, Molly came out to her mom, her dad Bob, and her classmates. Soon after that, she began fantasizing about a 2019 Pride parade in Buffalo Grove.

“We … felt so amazed and wowed,” Molly told NBC News in an interview. “I imagined having that in my hometown would be so cool and seeing the town supporting the community.”

With the full support of her her parents, the family contacted Indivisible Aurora, the organization behind Aurora Pride Parade. Indivisible Aurora was happy to help, and as a first step they recommended that Molly start raising money, NBC News reported.

So, Molly and Carolyn launched a GoFundMe fundraiser, with a current goal of raising $10,000 for a Pride parade in Buffalo Grove. In a YouTube video the family uploaded, Molly (with her fabulous rainbow hair) talks passionately about the campaign, noting that they will ultimately need to raise $30,000 for the parade, which NBC News notes is penciled in for June 2, 2019. At time of publication, the fundraiser has raised more than $6,700.

Molly has a clear vision for the parade, and she really wants it to be family friendly. In her YouTube plea, she says:

One of the most memorable things about the Aurora Parade was that it was very family friendly. This is how we want ours to be. We would like children, adults, elderly, everyone included. Please donate whatever you can to our case, and above all, please attend our parade next year. It would mean the world to me to to see my hometown showing support for the LGBTQ+ community.

Molly is also hoping for “some performances and speeches, kind of like a rally,” she told NBC 5 Chicago. Her dad also has a vision for the parade. "We also see at the end of the parade a party," Bob told the Daily Herald. "The Buffalo Grove Community Arts Center has reached out to us to be part of it, and we figured that might be a way that they can be part of it, if the parade ended there."

Plus, Molly already has the full support of Beverly Sussman, Buffalo Grove's village president, who told the Daily Herald:

I think she really wants to have something very classy, and I think her goals are to educate the community, to bring awareness to the community ... Here is a girl who wants everyone to be together to respect each other. And for a 12-year-old to say we should all respect each other and care about each other, I think that's very important.

Considering Molly is only 12 years old and just came out last month, it's amazing that she is already working to support the LGBTQ+ community in such a big way. However, it's no surprise that she was able to get organized so quickly, given that she actually started her middle school's Gay-Straight Alliance, NBC News reported. Molly told the outlet she was inspired to form the club. “The club gave students a space to be themselves,” Molly told NBC News. “A lot of students ended up coming out at the club, which we didn’t expect.”