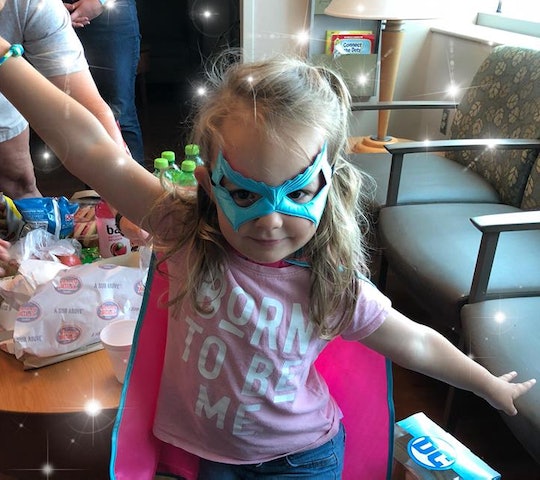 Molly McCabe, a 3-year-old from Winchester, Virginia, is a hero in her parents' eyes. This 3-year-old used Facetime to save her Dad's life when he suddenly had a stroke, and her mom definitely credits Molly's quick actions for saving her husband. If it weren't for Molly, Trevor McCabe's story could have ended very differently.

Trevor, who is only 27, was at home with Molly on the Fourth of July when he suddenly suffered a stroke, NBC 4 Washington reported. He reportedly "heard a loud humming noise in his ears," and apparently collapsed. Molly must have known something was wrong, because she quickly grabbed Trevor's iPhone and dialed her mom with the Apple video-calling feature FaceTime, The New York Post reported.

“She did a FaceTime call, and she was so brave, and she told me that daddy got sick, and she showed me where daddy was, and so I saw him lying on the ground,” said Molly’s mother, Devon McCabe, according to Yahoo! Lifestyle.

Devon told Romper via email, "She just kept saying 'Daddy, Daddy, look at Daddy' and then turned the phone so that I could see Trevor collapsed on the ground."

Initially, Devon missed the first FaceTime call, The New York Post reported. But the little girl decided to make another call with FaceTime about 15 minutes later, and that time, Devon picked up.

Devon was actually at work as a nurse in Winchester Medical Center's neurointensive care unit when Molly first made a FaceTime call, according to The Winchester Star. But when Devon saw what was happening in the second call, after Molly turned the phone to show her father convulsing on the floor of their family's home, "I knew something was gravely wrong," Devon told Romper.

"I told Molly that our neighbor and close friend would be right over and that Mommy was on her way home," Devon told Romper. Shen then called the friend to go to the McCabe house and they called 911, The Winchester Star reported.

Trevor was rushed to the hospital for initial care, but was then airlifted to another hospital for an emergency surgery, Tech Times reported. As it turned out, he had suffered a stroke that resulted from a blood clot to his basilur artery, a major brain artery. Less than 24 hours before, he had been kayaking on the lake and watching fireworks, so the diagnosis was a shock.

Devon was told that the type of stroke her husband suffered results in death in over 85 percent of patients. She told The Winchester Star, "The only reason he’s doing so well is because he was able to get intervention so quickly,” she said, which directly credits her daughter Molly's quick thinking.

And she's not the only one who thinks Molly is a hero. "Trevor’s ER physician, neurologist, and neurosurgeon have all confirmed that Molly’s phone call saved his life," Devon told Romper. "The clot was in the basilar artery, which supplies blood flow to the brainstem, which controls our basic life functions. If much more time had passed, Trevor’s brain would not have been able to control his heart rate or breathing."

Doctors discovered that Trevor has a rare condition in which he has a hole in the heart that didn't close since infancy which makes him more prone to strokes, Tech Times reported. But he's only 27, and a "vast majority" of strokes occur in people over age 65, The New York Times' Well blog reported in 2012. So a stroke is likely not something the family thought they'd be dealing with over their Fourth of July holiday.

Thankfully, Trevor is on the road to recovery. Devon told Romper on Friday:

Because of the stroke, his brain started to swell on the 5th and he had to have emergency brain surgery and be put on life support. We were able to take him off the breathing machine (life support) three days ago. Today, he worked with physical therapy to try and start learning how to walk again. His speech is still difficult to understand, and he needs a feeding tube for now, but every day he gets stronger and stronger.

As for Molly, Devon has nothing but praise for the little girl, though she is concerned with how traumatic the experience may have been for the 3-year-old. Devon wrote on Facebook Friday:

...so grateful Molly will grow up knowing she is a hero. The experience last week was obviously very traumatic for her, and I am hopeful that the public praise she is receiving will help her look back on this experience with pride and positivity as opposed to just the fear and anxiety associated with that awful day.

Devon told Romper, "Over the last 9 days, Molly and I have had many conversations about what happened to daddy. She has asked many times why Daddy got sick. I explained to her that Daddy has a boo boo on his brain and the boo boo caused him to fall and have trouble speaking and moving."

Very smartly, she said 'But if the boo boo was on his brain, how could they see it?' And so I explained the special machines they have at the hospital to see inside our bodies. She was very excited when I told her the tube was out of Daddy’s mouth, and she was able to see him for the first time 2 days ago.

Devon was shocked by Molly's brave actions, because she didn't know Molly even understood how to use the video feature on her phone. Devon told Romper:

We’ve never taught her how to use FaceTime by herself. However, we call her grandparents frequently on FaceTime, just about every other day or so. She can’t read, but she has always had an incredible photographic-like memory.

Our best guess is that she recognized the letters that make up my name (there is no contact picture in my husband’s phone for me) from watching him text and call me in the past. Then she went through the motions that she’s watched us do countless times in the past to make a FaceTime call.

Devon told Romper she wants people to know that kids can do more than we think they're capable of. "Teach them to be brave and listen to their 'inner voice.'" She said. "Be careful with technology, but do not be afraid of it. Although we did not teach Molly what to do in case of an emergency, I am now a firm believer that your child may be ready for that conversation at a younger age than you might think!"

I guess you really never know what kids are picking up from watching their parents. In this case, something this tech-savvy little girl learned from her parents saved her dad's life, and that's a truly amazing turn of events.

Trevor and Devon are both on family leave, and their medical bills and “normal life bills” are mounting. If you'd like to assist superhero Molly's family, please visit their GoFundMe here.

More Like This
Princess Charlotte Is Ready To Be A Soccer Star, Too
Your Guide To Taking Tylenol While Breastfeeding
Is It Safe to Take Ibuprofen While Breastfeeding?
Janet Jackson's Son Eissa Is A Little Musical Prodigy In The Making