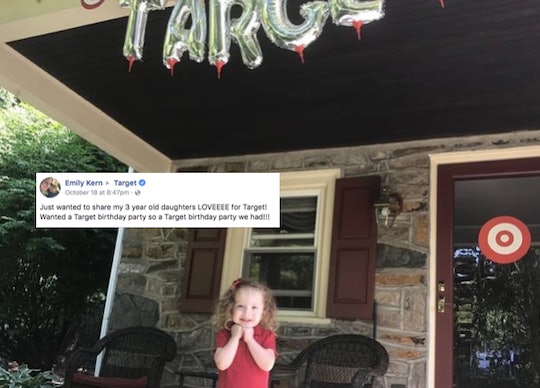 It's every toddler's dream to have a birthday party inspired by the happiest place on earth, and no, I'm not talking about Disney World. This 3-year-old's Target-themed birthday party proves that dreams really do come true, for moms and kids alike. If you're planning a party and wondering what direction to go in, perhaps try for something unconventional instead of sticking to the norm.

Mom clever girl's mom Emily Kern posted a photo collage to Target's Facebook page, writing: "Just wanted to share my 3 year old daughters LOVEEEE for Target! Wanted a Target birthday party so a Target birthday party we had!!!" Users everywhere fawned over her pictures, and now the post has been shared upward of 16,500 times, with over 28,000 comments and 158,000 likes. Suffice it to say, her daughter's birthday was a hit. The road to a Target-themed birthday party, however, had some twists and turns.

Kern told Cafe Mom, there was no contest as to what her daughter, Charlie, wanted her theme to be, but when she first insisted on a Target party, her mom didn't take it super seriously. Kern tried convincing Charlie that a Trolls party might be a little bit cuter, "But ... without fail, she said, 'Target,'" every time, Kern shared with the outlet.

The love of Target runs deep. Charlie gets to go to Target about once a week, both with her mom and with her babysitter. And, as is the case for so many others, Target quickly became an obsession. She told Cafe Mom, "No matter where we are, she sees the Target symbol and yells, 'Yay Target!! I'm so excited!'"

The Target-themed birthday party was a multifaceted occasion. It wasn't just about the iconic, red bullseye and aisles of household products, according to Cafe Mom, but it included the entire Target experience, from carts to check-out. Guests were able to pick out their goodie bags at a mock "Dollar Spot." Kern told the website:

I got bulk items of toys and candy and bubbles and put them in bins so the kids could "shop" for whatever they wanted. I had gone to my local Target and they were kind enough to give me a bunch of checkout bags as well as stickers for the kids. I think that was their favorite spot of the day!

Adding a choice element to a goodie bag levels-up a party immediately, and is something parents can add to any birthday theme.

And the photos of the day are amazing.

Speaking to Romper, Kern shared that the reaction to her Target post has been totally unexpected. "I was really posting just to share with Target and Charlie’s love for the store," she said. But, it's worked out for Charlie, too. "I have had a few people want to send her little Target stuff like a dog and a hair clip. She will be so excited to open them up," Kern told Romper.

Target even responded to the post, praising Charlie's #Targetstyle. Five days after the fact, Kern's phone is still blowing up with new Charlie-Target fans, and Kern says she hopes "that Charlie’s party inspires others to get creative and have fun with it!" Because honestly, cookie-cutter, fad birthdays have got to go.

Though this isn't the first Target-themed birthday party to hit the Internet, Kern's touches make it absolutely special. And if the comments on Kern's post are any indication, parents everywhere are downright inspired to incorporate the Target theme next time around.