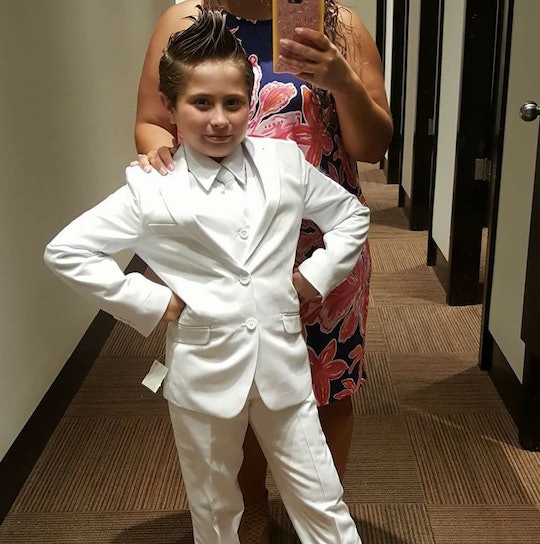 No child should ever have to feel like they're being excluded — whether it be from friend groups or extra curricular activities. Children are just looking for a place where they belong and they'll spend a lot of time doing so. So, it is sad to hear when a young child can't participate in something based on the way they look or dress. For example, this 9-year-old girl was reportedly banned from wearing a suit to her first communion by her church and her mother's words matter so much.

Romper has reached out to the church, St. John the Evangelist Parish, for comment, but has not heard back at this time.

A mother will do anything to protect her child from this kind of exclusivity, and Chris Mansell is no exception. Mansell had been sharing photos of her young daughter, Cady, to her Facebook page leading up to receiving her first communion at her Catholic church, St. John the Evangelist Parish, in St. John, Indiana. But there was just one thing — Cady wanted to wear a suit to her first communion, rather than a dress. Mansell explained in her Facebook post that her daughter, who Mansell describes as "sweet and smart and caring" loves wearing suits (who can blame her?) and that her love of them started when she was four with a bow tie and has grown into a collection ever since.

After purchasing the suit weeks before making her first communion ceremony, according to Mansell's Facebook post, the children were given a dress code. Still, with her daughter determined to wear the suit, as she described on Facebook, Mansell was called into the church for a meeting and was told that Cady had to wear a dress, otherwise she couldn't be in any group photos or take part in the ceremony. Mansell wrote on Facebook:

My daughter just wants to wear pants while worshipping the Lord and receiving the Eucharist with her classmates. She's not hurting anyone. However, being excluded and ostracized IS hurting her.

Mansell's words are so admirable and people agree. The fiercely loyal protection and pride that Mansell has for her daughter has led the Facebook to resonate with so many people. The post was shared to the Facebook group, Pantsuit Nation, on Tuesday and has since gone viral, with 60,000 people seeing her story, according to Mansell.

Mansell told Romper that she had tried to get the attention of Pantsuit Nation in late September to bring "any kind of attention to her daughter's story" — but it took two weeks for the post to be approved. Still, Mansell didn't feel like anyone would be interested in her daughter's story after she failed to bring attention to the post on her own. Mansell told Romper that she was surprised by the outpouring of support "when less than 2 weeks ago, it seemed like no one cared."

St. John the Evangelists' Parish told CBS2 in a statement that the decision all boiled down to dress code:

Mansell reportedly pulled Cady from the school and church in response after the church allegedly told Mansell that she and her husband were raising their daughter wrong. Cady has since started over in a new school, according to Mansell's Facebook post.

Although her saga with the church may be over, Mansell is beside herself that her daughter's story is gaining this much attention. Mansell told Romper:

It's unimaginable but we are so grateful. I'm overjoyed to be able to tell Cady's story, to be her voice, to give her thoughts and feelings a platform. And we are amazed at the outpouring of love and support.

It is no surprise that people are giving Mansell's post so much attention. Nobody wants to see a kid be left out, simply based upon their decision to break the mold or challenge the norm. While things like these are becoming more accepted, Cady's story only shows that the fight to be your true self is far from over.