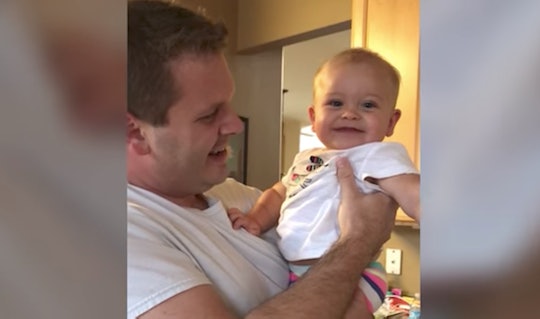 If you're the parent of a child who was born without any medial problems, you might not often think about what it would be like if your child struggled to meet important milestones in their development. For parents like Michael and Becca Caputo, however, this painful scenario was something they had to face each day, as their baby was born with her vocal cords fused together, a condition that prevented her from saying her first words. The good news is the Caputos' baby can now talk after undergoing surgery, and this video of her saying "dada" for the first time will definitely make you tear up, at least a little.

Mike and Becca's daughter, Maddie Caputo, was born seemingly healthy in October 2016, according to The New York Daily News. It was only until a few weeks later that Mike and Becca noticed that Maddie's cry didn't sound quite right. Concerned that Maddie's cry was too soft and hoarse, Mike and Becca took Maddie to the doctor's for a check-up. When the doctor took a look at Maddie's throat, he realized that Maddie's vocal cords were 75 percent fused together, and that she had been born with a "narrow airway not much bigger than a straw," according to the Daily News. Needless to say, this condition prevented Maddie from saying words at a typical volume — everything she tried to say would come out as a grunt or whisper.

Doctors initially tried to fix Maddie's vocal cords when she was just a few months old, but the surgery didn't work. Then, a few months after the first surgery, Maddie developed a life-threatening infection — a scary incident which put off the second surgery until August. Luckily for Maddie, the second surgery — laryngotracheal reconstruction surgery — worked. Three weeks after the procedure, Maddie said her first word: "dada." Grab your tissues and watch the emotional and touching moment below:

OK, who else is totally sobbing right now? Watching Maddie working her hardest to say "Dada" totally got me, and I teared up listening to Mike cheering her on. What a beautiful and special moment.

Now that Maddie can speak, Mike and Becca are savoring each and every moment. Becca said, according to The Sun:

It was incredible to hear her. It is a miracle for us.

Mike went on to praise Maddie for being a fighter, a compliment she definitely deserves considering she tackled multiple surgeries and infections like a total champ. Mike said, according to the NY Daily News:

Maddie is just amazing. She is so resilient. At one point things were looking really bleak, but she fought on. It is like she has some kind of superpower.

As for how Maddie's voice will sound as she gets older, doctors told Mike and Becca that it's likely she'll always have a bit of hoarseness to her voice (imagine Emma Stone's voice for comparison), which is really no big deal when you consider the alternative. For now, Becca and Mike are simply enjoying Maddie as a talkative and carefree baby — she regularly says "mama," "dada," and "bye-bye" all the time, according to The Scottish Sun. Mike and Becca also noted that Maddie is having a blast playing with her older brother, Andrew.

Mike and Becca's story is an important reminder to treasure each and every childhood milestone, and to be kind and considerate of parents who might be going through a difficult time with their own child. Although Maddie's surgery was a success, there are plenty of other children in similar situations that aren't as lucky. It goes without saying that the parents of children born with medical issues need all the support and love they can get.