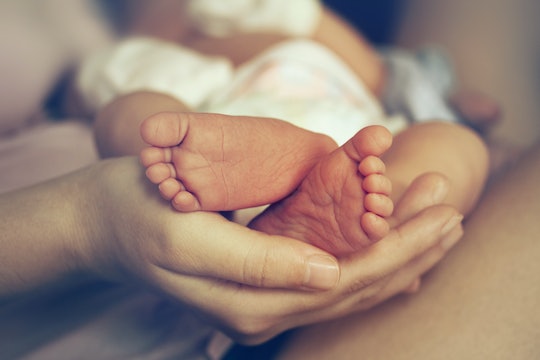 The grief and feeling of heartbreak a mother feels after losing a child is unimaginable. But sometimes, an important message can come from the pain, and there can be some sort of closure, and growth. For example, mom Gabriella Morely is warning pregnant women not to ignore third trimester itchiness because it can actually be an important symptom. Morley, of Bramley, Leeds, in the United Kingdom, is sharing an crucial warning for other moms-to-be after she gave birth to her stillborn daughter. Morley, who was 39 weeks pregnant when she realized her baby hadn't been moving for a while, decided to use her pain and personal experience to share a warning to pregnant women everywhere about the one symptom that could have warned her of her condition: itchiness.

According to The Independent, Morley said that she felt some itchiness on and around her midsection, but she kind of just thought that this was a common side effect of pregnancy, and didn't give it much thought. Unfortunately, this wasn't the case. In fact, Morley was suffering from a rare liver condition called intrahepatic cholestasis (ICP), which caused the acidity in her body to rise to extreme levels, effectively poisoning her baby, and eventually sending her into cardiac arrest.

Morley was heartbroken when she learned about her daughter, who she had already named Poppy. She told The Daily Mail:

I remember letting out this scream but then I fell silent and just stared out the window. Matty was stood next to me squeezing my hand with his head down crying. It didn't feel real.

When I walked out of the room I could hear all these other babies' heartbeats from the other rooms and I fell apart. You never think this could happen to you.

And while delivering Poppy is something Morley wants to forget, she and her husband decided to spend some time with the baby girl in the hospital, and take some photos to commemorate their time together.

To see the pictures, you can visit The Daily Mail's story, but they may be disturbing to some readers.

But, Morley decided that she wanted to share her story so that other pregnant women could become aware of the rare condition and its consequences. Morley told The Mirror:

It is a rare condition but I think more mums need to know about it. I don't want anyone to ever have to go through what we did.

Losing Poppy has been the most devastating thing ever. No mother should have to experience what it is like to go through nine months of pregnancy and leave hospital with no baby.

But it does happen and people need to talk about it more.

According to the United States National Library of Medicine, itchiness is the main symptom associated with intrahepatic cholestasis. "The itchiness usually begins on the palms of the hands and the soles of the feet and then spreads to other parts of the body. Occasionally, affected women have yellowing of the skin and whites of the eyes (jaundice)."

About 1 in 1,000 women are diagnosed with intrahepatic cholestasis, according to the American Pregnancy Association, and while the condition is rare, it can be pretty hard to treat. According to the site, "Women with cholestasis should be monitored closely and serious consideration should be given to inducing labor once the baby’s lungs have reached maturity." So, pregnant people who notice itchiness during their third trimester should go see their doctor immediately. Because it could end up saving their child's life.