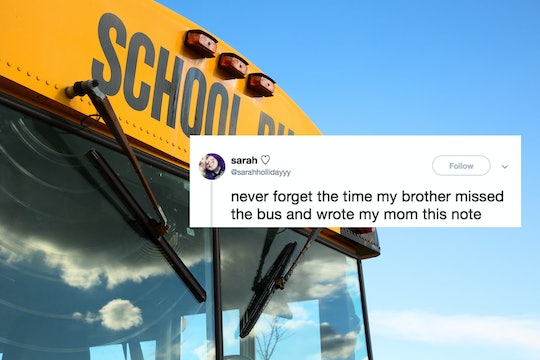 Kids say some truly wild things, but sometimes what comes out is pure gold. Case in point: This boy's note to his mom explaining why he missed school, complete with a pros and cons chart, and it's a masterpiece. The note, shared by the tiny genius' sister on Twitter, has been making its rounds on the internet and, TBH, it'll make you laugh so hard, you'll probably cry. Clearly this kid's a smooth talker.

In the note shared on Twitter by @sarahhollidayyy, the boy revealed to his mother that he missed the bus that morning and took it upon himself to opt to stay home. He admitted in the letter that, as a result of his decision, his mom was likely "on a roller coaster of emotions." The young writer said it "was a tough decision" to skip school, adding that he intended to spend the morning "in my bed moping."

"As your son I regret to inform you that I've missed my means of public transportation," the note began. "I know you must be on a roller coaster of emotions right now but rest assured, I've decided to stay home. This was a tough decision to make while you were gone for 20 minutes."

On the back of the tweeted letter was a pros and cons chart, in which the boy weighed the good and bad of his decision. On said chart, the young guy made note of things like it being his "first day home this quarter," which wouldn't affect his grades, and the fact that as a result of his impromptu sick day, his mom would "have to call the school and tell them i've got polio."

Not letting his mom know he missed the bus earlier may not have been the best call, but you can't knock this kid's creativity. The boy's sister tweeted an update, revealing that their "mom let him stay home."

The tweet has been shared more than 200,000 times and received over 900,000 likes. According to Fox 8, the letter was actually written in December 2017, but was only recently shared on social media. The boy, who wasn't named, resides in Willowick, Missouri with his mother and sister Sarah, who shared the note on Twitter. The boy was permitted to stay home that day, but it's unclear how his viral fame was received by his mother.

What is clear is that it's definitely a hit on Twitter...

Everyone deserves a day off here and there, even kids. In fact, taking time out of school — on rare occasions, at least — can be good for kids, and help them avoid burnout. Attendance challenges and perfect attendance awards encourage kids to come in every day, but pushing your kids beyond their limits may not be in their best interest. And it's clear this kid's mom made the best decision on the day this golden note was written.

Of course, letting your kids stay home from school shouldn't become a habit, but you have to applaud their hard work when you can. Plus, if my son came to me with a well-thought out list like the viral list circulating on Twitter, I'd be hard pressed to force him into the classroom that day.

More Like This
Reddit Is Not Impressed With Dad Who Hid Neighbor's Gnome Because It Scared His Kid
'Squid Game' Is Coming Back For Season 2 On Netflix: Here’s What Parents Need To Know
Viral TikTok Breaks Down How Beautifully Bluey Depicts One Character’s Infertility
WowWee’s New Fairy Finders Will Keep Kids Distracted For Hours