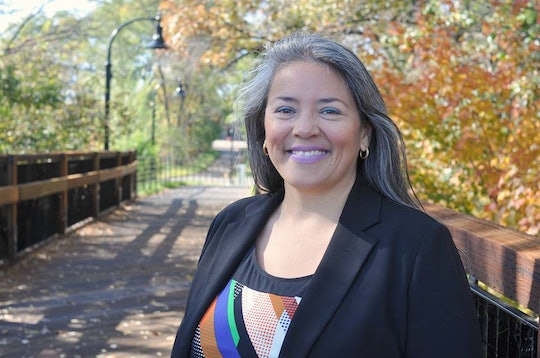 This Councilwoman Was Reportedly Banned From Breastfeeding At Work, & She's Not Having It

It's no secret that women have to go through a lot of pain, injustice, and difficulties all throughout life, but especially when they become mothers. Such is the case with this councilwoman, who was reportedly banned from breastfeeding at work. According to Yahoo Lifestyle, Catherine Emmanuelle of Eau Claire, Wisconsin, is a "two-term City Council member there who has been banned from breastfeeding her infant son while sitting in her legislative seat in council chambers." And now, she's fighting back.

Romper has reached out to Emmanuelle as well as the Eau Claire City Council President, Kerry Kincaid, for a comment on these claims and is awaiting a response.

Emmanuelle has reportedly since retained a lawyer to help fight this alleged ban. According to the Duluth News Tribune, "Emmanuelle has retained a civil rights lawyer claiming state statutes allow mothers to breastfeed in public wherever the mother and child are authorized to be."

Speaking to Yahoo Lifestyle, Emmanuelle expressed her frustration at the city's stance on allowing her to breastfeed while working. "I am really perplexed about why the council is focused on how the city is going to put up barriers for particular people versus how we can take down barriers and fold young people into the process," she said.

When Emmanuelle needs to feed her 11-month-old son now, she is reportedly forced to sit "in the public seating area and behind the city clerk, away from her official legislative seat," Yahoo Lifestyle reported.

The person who allegedly told Emmanuelle she couldn't breastfeed in her council seat, City Council President Kerry Kincaid, told the Duluth News Tribune, "I do have a responsibility as the chair to maintain meeting decorum and I relied on past practice of how meetings have been run over the last 100 years."

For a while, according to the Duluth News Tribune, Emmanuelle sat where Kincaid told her to, and attempted to find some compromise. But, having to sit away from her colleagues didn't allow Emmanuelle to truly do her job.

A letter obtained by the Duluth News Tribune from Emmanuelle’s attorney, Carousel Bayrd, addressed to Kincaid, makes just this point. Bayrd wrote: "If she is not seated with her colleagues at the dais, she cannot participate in the meetings and discussions."

Unfortunately, Emmanuelle's case isn't the first of its kind, and it probably won't be the last either. In 2013, Stephanie Hicks, a police officer in Tuscaloosa, Alabama, was reportedly forced to quit her job after she came back from maternity leave and no breastfeeding accommodations were made for her to continue to be able to work, according to People. Now, four years later, the former officer has "won her discrimination case against the state police department after they demoted her and refused to find proper breastfeeding accommodations when she returned from maternity leave," People reported in September.

That's certainly good news and a victory for breastfeeding rights — after all, supporting breastfeeding moms at work is not an unreasonable "demand" — but the fact remains that it took over four years for the mother to prove that she was wronged. But, hopefully with such a precedent set now, Emmanuelle won't have to wait as long to have these understandable requests and not outrageous accommodations met.

Because having a child and becoming a parent shouldn't mean you have to compromise any part of your career if you don't want to. Not even if it's for a brief moment in a hallway.