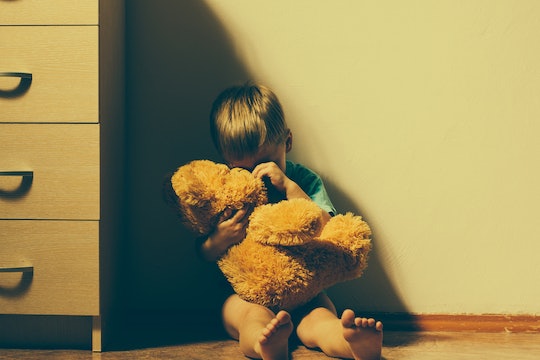 This Country Will Soon Make It Illegal To Spank & Hit Kids

Parents don't always agree on what's appropriate and what's not when it comes to disciplining kids. And the question of whether hitting and spanking them is a reasonable reaction to bad behavior may be one of the most divisive related topics of all. Somewhat confusingly, there's no federal ban on the practice in the United States, where individual states set the rules. But, elsewhere in the world, governments and outlawing physically reprimanding children altogether. For example, Scotland will soon make it illegal to spank kids — and even more countries could very well follow suit.

There's little doubt that this will endure as a controversial issue for years to come, but it's encouraging to seem some countries taking a stand to protect the most vulnerable among us. Because that's exactly what Scotland did. According to the BBC, the country's government confirmed Thursday that a proposal to give kids the same protections as adults when it comes to physical assault will become law. And when it's framed that way, the logic seems pretty much ironclad.

After all, there's no "justifiable assault" defense — which is the legal justification for hitting their kids Scottish parents previously could use — for hitting, smacking, spanking, etc., etc., etc. an adult. So why would one exist when a children are the victims of such treatment, especially because they're oftentimes the least capable of defending themselves?

It's just mind-boggling to me. So, good on Scotland for doing what an increasing number of countries have determined to be right.

And kudos to the rest of the United Kingdom, too. Because the children's commissioners of England, Scotland, Wales, and Northern Ireland are currently advocating for their nations to follow Scotland's example, according to The Guardian. That would mean nixing their own version of Scotland's now fortunately defunct justifiable assault: "legal chastisement," The Guardian reported.

If there's a true push to achieve this in these countries, they may join much of the rest of the European Union in committing to legal reform in this area. In fact, a total of 52 countries worldwide implemented bans on spanking before Scotland did the same, with France doing so in January 2017.

The United States, though, is not one of them. Instead, individual states dictate what is and what is not legal when it comes to hitting kids. And the rules are oftentimes vague and, in many cases, downright alarming.

In Oklahoma, for example, it's totally fine for parents to use a switch to hit their kids, as long as they don't exceed "ordinary force" in doing so, TIME reported. And Arizona and Alabama are good with hitting as long as it's limited to "reasonable and appropriate physical force," according to TIME. And down in Texas, your plain old run-of-the-mill corporal punishment crosses into the realm of child abuse only when it results in "substantial harm to the child," the outlet reported.

But "substantial harm to the child" isn't just physical. There's evidence that kids who have been spanked are more likely to have problems such as aggression, anti-social behavior, and mental health and cognitive problems as they grow up. One recent study found spanking toddlers can have a negative effect on their temperaments even a decade later and beyond, according to USA Today. And then, yes, there still is the fact that these kids can get physically hurt — even if that's technically legal — because that's pretty much always a possibility when a full-grown adult lays a hand on a small child.

It's not all bad on this side of the pond, though. The rate of instances of physical punishment on kids in the United States is down significantly, according to a recent study. Researchers found that 46 percent of median-incomes mothers were previously OK with the idea of hitting kids, Slate reported, and by 2011, the figure had plummeted to 21 percent.

Clearly, Scotland's forward progress in this arena is pushing its United Kingdom counterparts toward cracking down against the mistreatment of children. It could be only a matter of time before the United States joins them.

More Like This
Prince William Shares How He Plans To Follow In His Mother's Footsteps With His Kids
Obamas Issue Powerful Statements After Supreme Court Ends Roe v. Wade
Viral TikTok Breaks Down How Beautifully Bluey Depicts One Character’s Infertility
Keep Talking To Your Kids About Abortion — It's More Important Than Ever