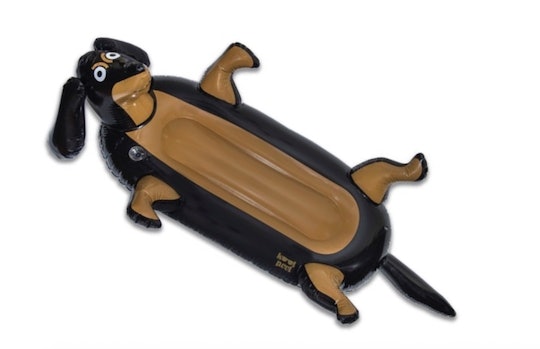 As you're sitting under mountains of blankets and wearing your flannel PJs, try to imagine the long, hot days of summer. Can you feel the sun on your neck, the cool, clear water of your backyard pool lapping at your skin? If you're struggling to get in the summer mindset, this dachshund pool float will cure your winter blues the second you see it.

The "Pool Pup" dachshund water float comes from the creative minds at Kool Pool, an organization that is using its passion for splashin' to benefit a number of good causes. As of now, Kool Pool's designs are only available via Kickstarter. But if all goes as planned, their numerous designs — including the Pool Pup — will be available in "every pool, river and water venue in the world!"

The Pool Pup is available for pre-order via the Kool Pool website and "should be back in stock in mid-summer." The company website describes the Pool Pup as "an eco-friendly float" designed to be "super thick and durable." It is so durable, in fact, that Kool Pool is offering a lifetime warrantee on the pup, as well as all other styles of floats. The Kool Pool Kickstarter has a goal of $10,000, according to Pretty 52, and its team has raised almost $4,000 of it thus far.

The Pool Pup is so massive that Amazon has listed it as not only a pool float, but also an air mattress, as Pure Wow reported. So even if you don't have a pool, you can totally still get your hands on one of these little babies. Because who needs a bed when you have a giant, inflatable wiener dog, right?

Along with being durable, the Pool Pup measures almost seven feet long from head to tail and can hold up to 300 pounds. Talk about a good boy. As an added bonus, the Pool Pup even has a cup holder.

As wonderful as the Pool Pups sounds so far, I haven't even gotten to the best part. According to The Standard, 50 percent of all the money raised by any of Kool Pool's floats are donated to a different charity. As for the Pool Pup, half of the money it generates will be donated to the Humane Society, as The Standard reported, which is reason enough to invest in one.

Along with this little cutie, Kool Pool also offers floats in the shape of avocados, gold chains, "chill pills," corndogs, ahem marijuana cigarettes, and my personal favorite: a pair of Free the Nipple circular floats, as Pretty 52 reported.

The mind behind the Kool Pool brand, who remains unnamed on the Kickstarter page, described the epiphany that led to these fun floats on the company's page:

So there I was..... sitting in an obnoxiously long line at Urban Outfitters. In my hand, a donut float. The person in front of me had a donut float too, and to my surprise the person to my rear had a donut float. A line of people, all with the same float. In the donut's defense, it's great. Who doesn't love Homer Simpson? The point is, our options were limited. Our only choices being a pizza slice, a donut, a swan and a flamingo.

And while he or she did decide to go with one of the floats, they apparently didn't last through the summer. The wear and tear were the final straw that led to Kool Pool:

What if we didn't want donuts? Or swans? Or pieces of pizza? I certainly didn't. Especially when they have been manufactured lacking the quality expected to justify the price.With limited options available to me and having a background in product design, I decided that I would come up with my own floats. What started out as a fun project, soon blossomed into a real and original pool float company with a multitude of fun and functional, high quality designs.

I don't know about you, but I'll be snatching up a Pool Pup of my own before the summer season. See you poolside!