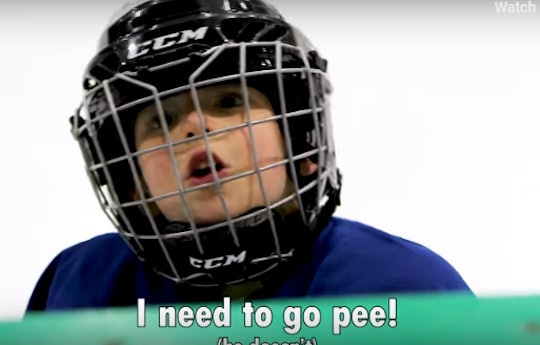 This 4-Year-Old's Monologue During Hockey Practice Is Utterly Precious

Do you ever watch your kid playing a sport and wonder what they're thinking about? Of course you do... I know as a mom of four sons I spent hours on the sidelines of soccer games, football games, basketball games, always wondering what was going on in their heads. Because especially when they're little, they don't appear to have any real sense of direction during the game. Well, some of us might have been wondering, but one dad's curiosity got the better of him. Wait until you hear what this dad's recording of his son playing hockey sounds like. It's not just adorable, it's oddly satisfying.

Proud dad and hockey lover Coach Jeremy, or Jeremy Rupke, decided to put a microphone in his 4-year-old son Mason's helmet during a hockey practice in Ontario, Canada recently, according to the Toronto Star. It seems he wanted to know what was going through his son's mind as he skated around on the ice among his friends and fellow players. And since young Mason appears to be rather a chatty sort of 4-year-old, he certainly seemed like the perfect candidate for the experiment. Because it would be vaguely boring to watch him skate around in silence, right? Fortunately this was definitely not a problem for Mason.

The video opens with Mason essentially rolling around on the ice as his fellow players skate past him. He appears remarkably unconcerned by them. Mason is also incredibly impressed with his own skills as a hockey player, truth be told. Before practice he is tryng his best to hit a crumpled up coffee cup and asks his dad, "Am I a good score-der?" Without waiting for a response he says, "Oh yeah I am!"

Couldn't we all learn a little something from Mason?

Throughout the next six minutes or so, Mason decides to lie down and take a nap on the ice, gets a burst of energy and yells to himself "One, two, one, two... I'm doing it!" as he tries to skate with both feet, sees some friends and starts a little sword fight (as you do), and asks his dad if they're going to McDonald's after. He also tries the old "I need to go pee" trick when he wants to come off the ice, and best of all, has a tiny fight with an imaginary "old fat can" who doesn't appear to be letting him go. It's important to note that there's not a single person near him when he says this.

Fans all over the world have fallen in love with Mason's video, with more than 4 million views on Twitter and YouTube after less than a week. Its popularity certainly stems from the hidden camera element, I'm sure, but for me there was something so endearing about Mason himself. His exuberance and his positive outlook are disarming; no matter how many times that kid fell on the ice he dusted himself off and was back on his feet. Eventually.

It was a beautiful peek into the mind of a 4-year-old, which is clearly a pretty beautiful place to visit.

More Like This
Reddit Is Not Impressed With Dad Who Hid Neighbor's Gnome Because It Scared His Kid
'Squid Game' Is Coming Back For Season 2 On Netflix: Here’s What Parents Need To Know
WowWee’s New Fairy Finders Will Keep Kids Distracted For Hours
The Covid Vaccine For Kids Under 5 Has Been Sent To The FDA For Review