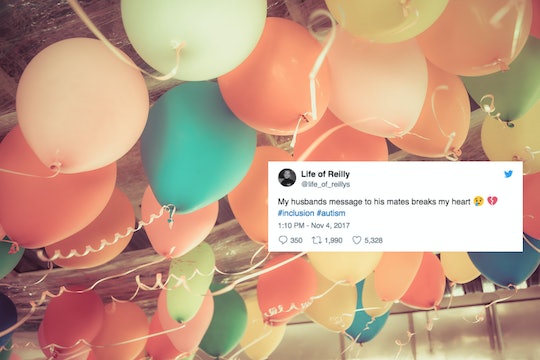 This Dad Says His Son Doesn't Get Invited To Parties Because Of His Autism, & It's Heartbreaking

As a parent, I want to shield my son from everything that is negative and hurtful. I don't want him to ever feel unwanted or unloved, by me, by his father, by his family or by the people around him. But parenting is harsh, and the reality is you won't be able to protect your kids all of the time. And, sometimes, you will feel immense pain on your child's behalf — like this dad who says his son doesn't get invited to birthday parties because of his autism. His letter is a heartbreaking — and infuriating — must-read.

According to Scary Mommy, Shane Stephenson, who lives in the United Kingdom, penned an expletive-filled post on Facebook on Saturday about his 6-year-old son Reilly, who is autistic and nonverbal. In the rant, a rightfully angry Stephenson tells off his so-called "friends" for neglecting to invite Reilly to their kids' birthday parties. He wrote, according to a screenshot shared by his wife, Christine, on Twitter,

My son Reilly has autism not f*cking leprosy; he is 6 years old and my so called friends who have kids also have kids parties. Not ONE invite not f*cking one. Think about that whilst you go and f*ck yourselves; have you any idea how hurtful that is? Just for the record in future don't bother he's not an after thought he's my every f*cking thought.

Christine Stephenson, who blogs about life with her son, told Scary Mommy that her husband wrote the open letter after reading a friend's post about their child's birthday gathering that Reilly didn't receive an invitation for. He presumed the lack of an invite to that particular party, and all other parties in general, is because Reilly is autistic. Christine said,

It hurt him, but that post was just the straw that broke the camel’s back. He has felt for a long time that we are often overlooked and support in general isn’t great.

The Stephensons aren't the only family to feel such exclusion. Deep-rooted ableism means children with disabilities are often ignored or disregarded. And for many kids likely Reilly, that means not being invited to their friends' birthday celebrations. Or the reverse: Your kid invites their classmates, but no one shows up to their party.

In fact, the Stephensons' post received hundreds of comments on Twitter from parents who say their families experienced the same treatment — either a lack of invitations, party no-shows, or both. Their tweet has received over 1,900 retweets and more than 5,100 likes as of Monday afternoon.

This is not the first time such a story has gone viral, though. According to Today, Jennifer Kiss-Engele, a mom from British Columbia, Canada, penned a Facebook post last year admonishing a fellow parent who didn't invite her son Sawyer to their child's birthday party. Her son, who has Down's syndrome, was the only student out of the 23 kids in his class who didn't receive an invitation.

Kiss-Engele wrote in June of last year, according to Today,

Some of the Stephensons' friends felt "mortified" that they are part of the issue, according to CafeMom. But being embarrassed doesn't do much to make up for the active exclusion. As Christine told CafeMom, parents shouldn't assume that a child with autism or another disability can't take part in a party or activity. It's better to ask and be turned down than to exclude a kid from social events.

When you actively exclude children, you're sending the message that they should be ashamed of who they are, and that they're not worthy of love. And that's a message no child should receive.