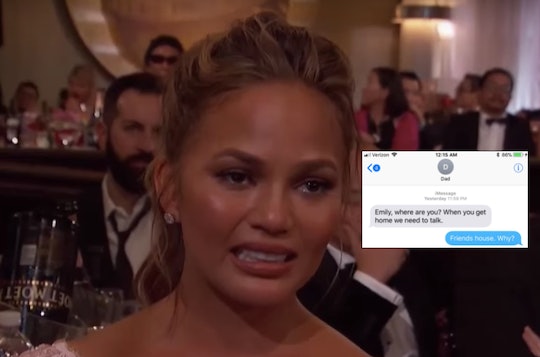 Sometimes parents just don't understand and that's completely OK. New technology, slang, and trends can all be a bit confusing, especially with how much of it there is and how frequently these things change. But while it is fun to hear your 65-year-old dad try to figure out what "lit" means, a lot of the time, it can be pretty cringeworthy. Like this dad, who thought he found an X-rated toy in his daughter's room, and the story will make you really suffer from secondhand embarrassment (like the rest of Twitter).

"You shouldn't waste your money!" Emily's dad wrote, according to a screenshot of a text she shared on Twitter, stating that the item in question was one of those "disgusting toys that vibrate."

But Emily really had nothing to be in trouble for and her father had nothing to be angry about. Because what Emily's dad thought was a "disgusting" purchase was actually something pretty useful — a portable phone charger.

The conversation will definitely make you laugh out loud because it is seriously hilarious — mainly because a lot of people have all been there at some point — whether they were Emily, cringing at just how out of touch their parent could be or Emily's dad, unfamiliar with the newfangled technology of the late 2010s.

But the story has a happy ending. After explaining to her dad what the item was, Emily's dad admitted his defeat and took responsibility for going into her stuff. "Don't tell your mom... sorry," Emily's dad wrote. "I just needed chapstick." Her dad, of course, ends the conversation like any concerned parent would. "By the way, be safe when you come home," he wrote. How sweet of him to be so concerned about both his daughter's purchases and her own health and safety.

Twitter users are freaking out by the interaction, probably because of how funny it is and just how relatable it is. Within two days of Emily posting screenshots of the conversation to Twitter, the tweet has gained over 142,000 likes and 40,000 retweets. Twitter users can't stop cringing over the conversation, replying with their own reactions to just how embarrassing the story is and their own personal tales of mistaken item identity.

Some Can't Get Over How Awkward It All Is

Some Shared Their Own Cringeworthy Stories

Really, a lot of users called out Emily's dad for shaming her and pointed out that, even if the portable phone charger had been "X-rated," then there's really nothing wrong with that (and parents slut-shaming kids can be a real thing).

The good news is, according to a follow-up tweet, Emily's dad did find her chapstick (thankfully) and has probably learned his lesson to never go through his daughter's stuff ever again. Maybe next time, he will simply just ask about things he is curious about or become familiar with technology trends before jumping to conclusions. Luckily, after just a brief moment of panic and the awkwardness that ensued afterwards, he had nothing to worry about and if ever did find something he didn't necessarily want to see, hopefully he'll ease up on his daughter.