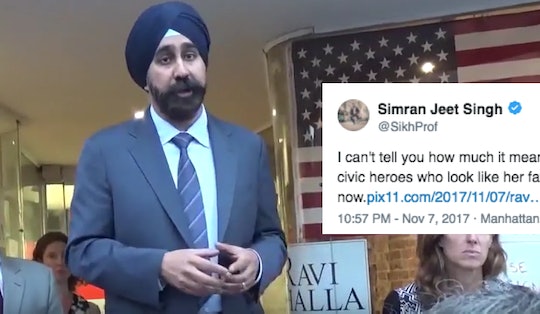 A number of electoral victories turned Tuesday into a momentous night for people of color, women, and the LGBTQ population. Many of the candidates running for office made history with their wins — not only for their cities, their states, and their communities, but for the Democratic Party at-large. Tuesday night proved that the resistance is making headway, but not just on a political level. In fact, this dad's tweet about the election shows why diverse representation is so important on a deeply personal level.

Simran Jeet Singh, an assistant professor of religion at Trinity University, took to Twitter Tuesday night to celebrate candidate Ravi Bhalla's historic win as the new mayor of Hoboken, New Jersey. Bhalla's electoral victory is rather significant for the Northeastern city, as the former city council member becomes Hoboken's first Sikh mayor, according to NJ.com. Singh honored Bhalla's success in a series of tweets, but one viral post, in particular, stood out for its honesty and vulnerability.

I can't tell you how much it means that my daughter will have civic heroes who look like her father. I'm crying right now.

Singh's tweet, which received 916 retweets and 4,504 likes as of Wednesday morning, explains succinctly why diversity in politics matters at the local, state, and national levels. The professor and activist uses his own personal connection to what Bhalla's electoral victory represents to express the positive ripple effect on the next generation.

In Bhalla's case, his victory shows Sikh boys and girls that they, too, can be mayor one day — that they deserve a spot at the table. It is the same effect that Hillary Clinton's run for president had on little girls across the country. The former secretary of state's historic nomination showed girls and young women that they can be in that position, too, and that nothing is out of their reach.

Bhalla's new post as Hoboken's mayor-elect, though, is more than about making history. His electoral win also shows residents of the city, and the country as a whole, that vile campaign tactics will not always win. Days before election night, flyers began circling around the city that label Bhalla as a "terrorist," although it was not the first time he had been referred to in such a hateful way, according to Pix 11. On Saturday, Bhalla tweeted out a photo of the flyers, which featured his picture and the message "Don't let TERRORISM take over our Town!," Pix 11 reported. The New Jersey native and self-described "die-hard Yankees fan" wrote,

Yesterday, a flyer w/ word “terrorist” above a pic of me was circulated in Hob. Of course this is troubling, but we won’t let hate win.

Bhalla's early Saturday tweet received 1,190 retweets and over 2,680 likes as of Wednesday morning. According to NJ.com, Bhalla beat out five other candidates vying for Hoboken's mayoral office, proving that his constituents had, in fact, not let hate win.

Tuesday night was a watershed moment for progressives. In addition to Bhalla's win, a number of other electoral victories across the country had made history, according to the Huffington Post. Most notably, activist and death metal vocalist Danica Roem became Virginia's first openly transgender state lawmaker, beating out Republican incumbent Bob Marshall, who introduced the infamous "bathroom bill" targeting transgender Virginians, the Richmond Times-Dispatch reported. (Roem will not be the first openly trans person to serve, though. That honor goes to Althea Garrison, who served in the Massachusetts House of Representatives from 1993 to 1995, according to CNN.) Roem is one of many transgender politicians who were elected to office on Tuesday night, making it a monumental night for the country's trans population.

Many cities and states had also seen their first black, female, or lesbian candidates elected to a non-judicial office. Some became mayors. Some were elected council members. And others claimed spots as state representatives.

But, no matter what office they now hold, these progressive, diverse politicians — and the people who voted for them — have shown the country that it can rise above November 8, 2016. That the United States can rise about the horrific events over the last year. It doesn't mean the country is healed, but at least it's starting to.