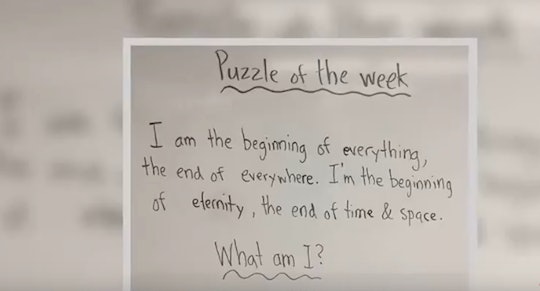 If you're a parent or work with children, you're probably used to how perceptive and deep kids can be. During my time as a teacher, I was often impressed with my students' hot takes on life and other complex topics, which is why I'm not surprised one bit that this first-grader's profound answer to a teacher's puzzle is going viral. Not only will it will reaffirm your belief that kids are creepy AF or that they're miniature philosophers, but it will also delight your inner nihilist.

When Bret Turner, a first grade teacher in California presented his students with their "puzzle of the week," he didn't expect it to become an internet sensation. The puzzle, which seems to be your average brain teaser on first glance, read: “I am the beginning of everything, the end of everywhere. I'm the beginning of eternity, the end of time and space. What am I?," according to MSN.

Of course, the obvious answer to this riddle is the letter "E." Kids, however, will sometimes look for the deeper, more complex meaning in things, which is why one student in Turner's class came up with a more philosophical answer to the prompt. Per Turner to his Twitter followers on Tuesday, one particularly enlightened first grader came up with "death" as the correct answer to the brain teaser.

Yep, I think it's safe to say this student is reading Albert Camus' The Stranger or a little Friedrich Nietzsche before bedtime.

Of course, Turner didn't know how to react to the student's incredibly reflective take on the puzzle, which is something I can definitely relate to. Sometimes it's just easier to just go with it, especially when you have a bunch of little eyes trained on you.

Turner said of the stunning moment, according to Mashable:

The first guess from one of my 1st graders was “death” and such an awed, somber, reflective hush fell over the class that I didn’t want to tell them that actually the answer is the letter e, which just seemed so banal in the moment.

But wait, the students' philosophical musings on life didn't stop there. Turner explained, according to Twitter:

Before I finally revealed the "correct" answer to the riddle, to a largely unimpressed audience, I fielded other guesses that continued along a similarly existential vein. There was "NOT everything," "all stuff," "the end," and maybe my favorite, "nothingthing."

IMHO, it sounds like these kids are simply describing 2017. And I agree with Turner that "nothingthing" might be the best response because it has the perfect amount of nihilism and absurdity rolled into one.

As for Turner's Twitter followers, they were also impressed by the reactions to the prompt, particularly where it concerned the student who replied "death."

Others couldn't contain their amusement:

Of course, it's safe to say Turner's students will care less that they've gone viral. I mean, fame is pretty meaningless, right? And why should these kids care about what random people on the internet think when life is essentially one big black hole of nothingness?

Or as my not so upbeat dad told me during Thanksgiving this past year, "We're all just renting bodies."

Plus, it goes without saying that generation Z isn't easily impressed by viral sensations. Turner explained, according to Twitter:

As for whether I’m considering telling the kids tomorrow that a tweet about them went viral, and given their facility with the internets, I expect their response will be “sure but did it go SUPERviral” and “just how many retweets are we talking about here” and “can I go to the bathroom”

Well, even if Turner's class aren't impressed with their newfound notoriety, they should be proud of their critical thinking skills. All jokes aside, these kids are clearly very smart, and they deserve all the praise they can get.