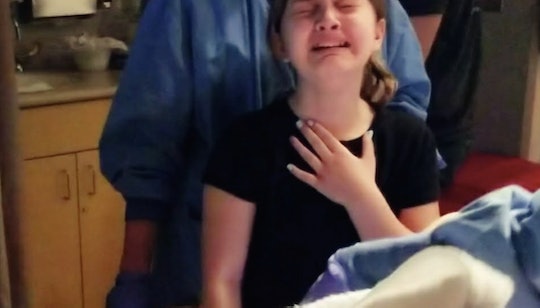 When a person suffers a pregnancy loss, their family members can also experience a profound sense of suffering. A miscarriage, especially in regards to families with smaller kids eager for a sibling, can be incredibly tough to recover from. If you've ever been in this difficult position or have experienced something similar, there's a good chance these photos of a girl helping deliver her sibling after her mom's three miscarriages will make you teary-eyed. The photos are not only moving, but they also act as a reminder that a miscarriage often affects more than one person.

Kelsey Davis, a mom-of-three from Arizona, vividly remembers the moment she told her now 8-year-old daughter, Brooke, that she would finally be a big sister. Brooke, who was 3 at the time, was ecstatic to learn the news, according to Love What Matters. Davis even organized a mini-photoshoot in the family's backyard to announce the pregnancy to their loved ones. In one of the cute snaps, Brooke is holding a little sign that reads, according to Cafe Mom: "I'm going to be a big sister. (Feb. 13 2014)."

It was heartbreaking. It really hit me hard … and Brooke especially. She was so young and we had been telling her she was going to be a big sister. So she took it really hard. She was completely heartbroken.

Understandably, Davis didn't want Brooke to be disappointed by another miscarriage, so she and her husband, Stefan, kept their next two pregnancies a secret. Both pregnancies resulted in miscarriages, according to POPSUGAR.

In 2015, however, Davis was able to tell Brooke that she'd finally be a big sister. Brooke, who was *thrilled* to have a sibling, asked her mom if she could be present in the delivery room during the birth. Davis said yes, but she made sure to educate Brooke on childbirth before the actual delivery.

Davis said, according to Love What Matters:

We explained the process to Brooke, how things work, where babies come from and that I would be in some pain but that it’s all normal. She decided to stay in the room with us while her sister Ellie was born on January 3, 2016. Their bond as sisters was immediately one of a kind!

In 2017, following the birth of Ellie, Davis learned she was pregnant again. This time, Brooke asked if she could assist in the birth. Knowing how important the moment was to Brooke, who "broke down with excitement" when she learned the news, according to PEOPLE, Davis agreed.

I had a great idea that she could not only be there, but would be able to cut the umbilical cord! [Brooke] liked the idea and at my next appointment I brought it up to my midwife. She said Brooke could even help deliver and catch the baby! The smile that drew up on Brooke’s face was pure excitement!

As you can see below, the honor meant the world to Brooke. From the tears of absolute joy to Brooke adorably clutching her heart, the photos are an emotional ride from start to finish. You can see the moment Brooke delivered her baby sister, Summer Tatum, below:

It's clear from the photos just how meaningful the experience was for Brooke. Davis said, according to POPSUGAR:

[Brooke] loves that she was there when her sisters were born. I think what she enjoyed most literally was the moment Summer was born. You can see how powerful her emotions were in the very moments she was born! She just loved it!

Although not every parent might feel comfortable with having their child in the delivery room while they give birth, you have to commend Davis for making Brooke feel involved in both pregnancies. Davis recognized Brooke's pain about the miscarriages and she transformed that suffering into healing, and it was unbelievably beautiful.