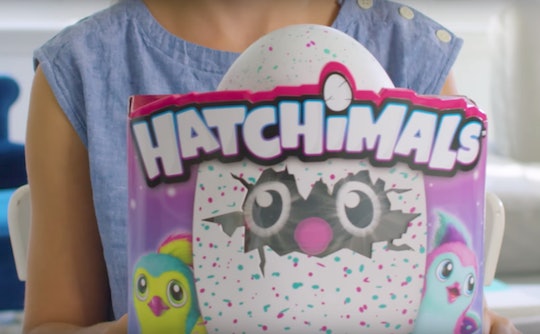 Parents all around the United States are probably still recovering from the mad pre-holidays frenzy to get their hands on the hottest toy item of 2016: Hatchimals. Well, Spin Master, the company behind colorful, fluffy interactive electronic pets that — wait for it — actually emerge from their shells in your kids' hands just announced the next iteration of its first success. And parents who spent weeks scouring the internet or driving from sold-out toy store to sold-out toy store only to come up empty-handed are going to want to get on this now. But, don't worry, there's a tool for that. So, get ready to meet your new best friend: this Hatchimals Surprise stock tracker. Chances are that your kid will be pretty psyched to discover a Hatchimals Surprise under the tree this year, and this hack can help make it happen.

First, what the heck is the Hatchimals Surprise? The product's list price of $70 may be just a $10 increase over that of the original, according to PopSugar, but the new version is literally Hatchimals 2.0. That's right: It's twins. The two Hatchimals Surprise "species" can be either identical or fraternal, have their own distinct personalities, and they interact with both each other and your kids. There will be singing, there will be dancing, there will be that initial awe of being right there as they burst their way out of their egg and are born.

But if history repeats itself and lack of availability makes it impossible for some parents to give their kids this particular gift, there could be tears.

Enter zooLert's Hatchimals Surprise Tracker. With the handy online tool, "your problems are a thing of the past!" the website promises. That is, if your problems consist of trying and trying to get ahold of a Hatchimals Surprise — both in retail stores and online — and then discovering that they're sold out everywhere. Fortunately, that's not the case just yet. I know because I checked the tracker, which provides seemingly endless links to reputable websites such as Amazon, Walmart, Kohls, SameStop, and more. It fills you in on the status of the item at particular retailers, as well as prices.

And if I were to wait, say, maybe just five more minutes and all the Hatchimals Surprises flew off their respective virtual shelves, there would still be hope. zooLerts also gives you the option to sign up for email and text alerts that will let parents know as soon as the toy is back and ready to be scooped up. Even if October is a little early for you to dive into holiday shopping, it's a good idea to bookmark the page for future reference.

Your kids probably already know this, but the new Hatchimals Surprise toys come in two varieties. The Giravens, which are giraffe/raven hybrids, CNN reported, are identical twins. And the Peacats, which are a cross between a peacock and a cat, are fraternal twins. They nestle in their shared egg one on top of the other, so kids will have to reach in once the 7- to 15-minute hatching process is over and pull the second one out themselves.

Hatchimals are already shaping up to match — or maybe even surpass — the popularity they enjoyed last year. According to Fortune, the original Hatchimals were the top-selling toy on eBay as of Oct. 9. Other high performers included the Nintendo SNES Classic, Fingerlings, Luvabella, and L.O.L. Surprise dolls.

Yes, it can be hard to imagine that the holidays are right around the corner when it's not even Halloween yet, but buying your Hatchimals now could save you many a headache in just a couple months.