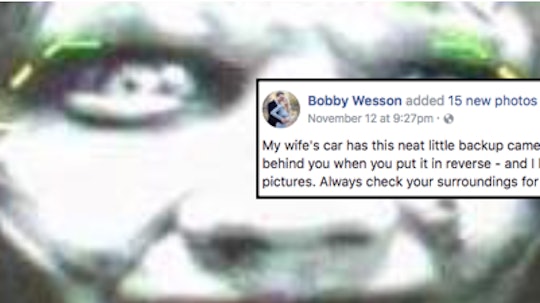 Let's face it: Long-term relationships have a way of getting, well, boring after a certain amount of time passes and you know everything about each other. It's the laughter that keeps things interesting. ("A couple who laughs together, stays together," right?) So why not spice things up with some light-hearted pranks? That's exactly what Bobby Wesson of Birmingham, Alabama decided to do when he set out to scare the crap out of his wife, Reyena. In fact, this husband epically pranked his wife and it's just... so extra.

On Nov. 12, Wesson shared a series of photos that will seriously crack you up. They might even make you a little jealous because you'll wonder why you hadn't thought of it first. OK, so you know those nifty cameras that help you make sure you're not backing into anything when driving in reverse? Wesson decided to fasten some special photos in front of this camera on his wife's car. And the results are priceless.

On Facebook, Wesson wrote: "My wife's car has this neat little backup camera that shows what is behind you when you put it in reverse — and I had some tape and some pictures. Always check your surroundings for safety."

Gah! WTF. I'm pretty sure I'd pee myself screaming if that popped up in the reverse camera. Poor Reyena was definitely not expecting it.

Wesson had set up the prank while his wife was at work as a trauma nurse, according to Scary Mommy. So when Reyena went to leave after her shift, this lovely face was right there to greet her. Wesson could have stopped there, of course, and the prank still would have been an epic success. Instead, he continued to scare the crap out of his wife for the next month, according to Scary Mommy.

There was Pennywise the clown from It, which was a real scream.

"You think ur funny but ur not," Reyena texted her husband. "I think I broke the screen hitting it ... I screamed and hit it and it's all scrambled up now." Wesson replied, "Really?" to which Reyena shot back, "No, but I'm gonna scramble ur face seriously."

And then there was this lovely fellow.

As you can see, Reyena started to anticipate her husband's antics and began checking her car beforehand. She also took the time to point out a more constructive way for Wesson to spend his time. (Get on that china cabinet, man!)

It's Harry from Harry and the Hendersons!

I have a strong feeling she did not, in fact, send him a photo of her boobs.

And who expects Bill Clinton to be standing behind their car? C'mon!

LOL. If this prankster husband seems familiar, it's because this isn't the first time he's risen to viral fame because of a Facebook post. Earlier this year, Wesson pulled another super-involved prank on his wife — except that time, it included their son and his hair. Or lack thereof.

"Sometimes Rayena leaves me alone with the baby," Wesson wrote alongside a series of text exchanges. With the help of some convincingly photoshopped images, Wesson tricked his wife into thinking their son got a hold of a razor and shaved his head. (You know, right before they were supposed to have family portraits taken. Because of course.) Wesson had figured out how to edit the photos with the help of online video tutorials, according to Scary Mommy. He was even armed with a photo of blonde hair clippings on their bathroom floor. This prankster knows how to commit. And boy does he deliver.

In case you're wondering, Wesson also has an incredibly sentimental side. Another one of his Facebook posts, which went viral back in 2015, served as a tribute to his amazing, selfless wife. "My wife is a nurse. My wife is a hero," sums up his touching words pretty well. But seriously. If you haven't already checked it out, this is a must-read.

I'm not gonna lie; I'm incredibly grateful that my husband doesn't try to scare the crap out of me. But it's kinda hard not to admit these two are the sweetest. I can't wait to see what hilarity Wesson has in store for his wife, next!