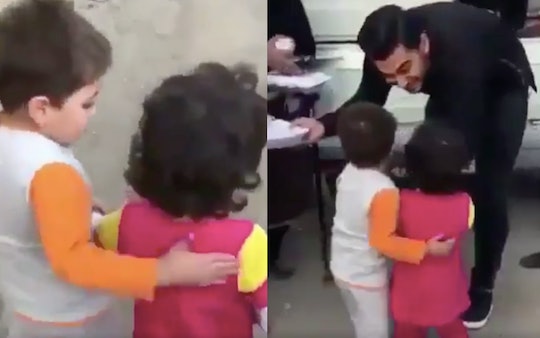 At least 530 people were killed in a 7.3 magnitude earthquake that rocked the Iran-Iraq border on Sunday, and thousands more were left injured. This was the most powerful earthquake of 2017, and the tremors were felt as far away as Turkey and Pakistan. The devastated region, much of which is now buried under rubble, will struggle to recover from the quake. It's a dismal situation, and will remain dismal for the foreseeable future. But there is one small ray of sunshine amid the darkness: this viral video of a little boy making sure his friend got food during earthquake relief efforts in Iran and it will remind you that, underneath it all, people start out in this world as genuinely kind.

According to The Independent, the western Iranian town of Sarpol-e-Zahab, in the province of Kermanshah, suffered the brunt of the earthquake. All of the deaths reported so far by rescue workers were from this area along the Iran-Iraq border, and at least 8,000 people are in need of shelter. Even more people throughout the province have been left without electricity, and are living outdoors in frigid temperatures for fear that aftershocks could topple local buildings.

And in the middle of all this fear, one little boy (who must be incredibly frightened himself) was thinking of someone else. His little friend, who apparently did not get quite enough food from aid workers.

This little boy, who has not been named, was taped grasping the hand of his friend and marching her up to the food truck, saying, "You didn't give her enough food," as translated by Iranian journalist Sadegh Ghorbani. After she was given some food, he seemed ready to walk away, before aid workers (who were clearly moved themselves) turned him around to make sure he had enough food as well.

It was one of the purest, sweetest, most unselfish things I've ever been blessed enough to witness, especially considering the precarious circumstances surrounding it. I'm not the only one to have been genuinely moved by this little boy. Ghorbani captured this moment of pure human kindness, and shared it with his Twitter followers on Wednesday. By Thursday afternoon, the tweet had been shared more than 36,000 times and has garnered more than 91,000 likes. And the comments? Splendid. It seems everyone was in dire need of a reminder that kindness does exist.

People were moved not just by this little boy's generosity and thoughtfulness, but also by his maturity. The way he led his friend with such confidence, making sure she would be well cared for. Because he is a natural helper, and this is something that should never be underestimated.

While so many people want to help the people of Iran during this terrible time, it's no easy feat. There are U.S. sanctions imposed against Iran, according to the United States Department of State, which have been in effect since 1979 when the U.S. Embassy in Tehran was seized. Fortunately, there have been a few charitable organizations that have been given special license to use American dollars in Iran:

When I watch the video of this little boy helping his friend, it isn't just his actions that strike me. It's the look on his face at the end of the video, when he is given more food than he expected. He wasn't expecting anything. The look he gives the camera, that happy, surprised smile, is perhaps the thing that will stay with me the most. The thought of a small child helping without any expectation of reciprocity, without thought for himself at all.

I want him to know he is not forgotten. That help is coming. And that he did the right thing.