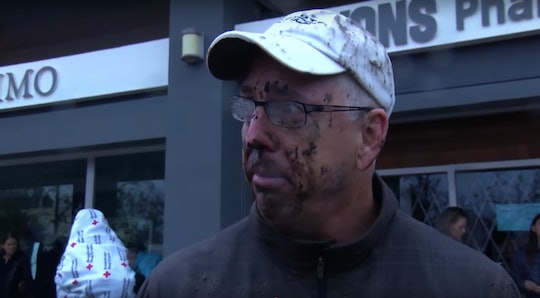 Whenever a tragedy strikes, it can be hard to watch the news and keep up with everything. Which is why it's always a good idea to look for the people helping out and doing good, like this man who reportedly saved a 2-year-old girl in the California mudslides and all of the other neighbors coming together to help search for missing people.

California just cannot catch a break this year. After devastating wildfires wiped out all vegetation in Southern California this fall, intense rainfall caused the mudslides this week. There are still dozens of people missing and 15 reported dead, according to CNN.

According to the New York Post, Berkley Johnson of Montecito heard crying by his neighbor's home on Tuesday. "We don’t know where it came from but we got it out, got the mud out of its mouth. I hope it’s OK. I’m glad we got it out but who knows what else is out there," he told local NBC News affiliate KSBY 6. Johnson reportedly dug about four feet into the ground to rescue the girl, who had likely been caught up in the river of mud, ending up by Johnson's house. Johnson didn't know what happened to her parents.

Johnson told the Santa Barbara Independent that the little girl looked like "muddy doll," when firefighters joined him and his wife to dig the her out.

Johnson and his wife's home was hit by the mudslides, too. He told the local NBC affiliate, "I heard the rumbling of the rocks and I looked up and the river and the trees were coming down like chum, chum, chum. We ran into the house and right then the boulders busted through our house."

The Johnsons were shocked at how quickly this flood happened. "This was an hour of rain, and the house was gone," he told the Santa Barbara Independent in the same interview, and noted that next time he and his family would follow evacuation orders. However, he noted that he couldn't imagine the young child he helped rescue would have survived if he and his family hadn't been there to hear her crying.

According to CBS 2 Los Angeles, dozens of people have been rescued in the mudslides, including a family of five, with a newborn and a dog, that were picked up a chopper from their rooftop.

Santa Barbara County Fire Department spokesperson Mike Eliason told the BBC that it was heavy run-off that caused the flooding, forcing homes off their foundations and causing boulders "the size of small cars" to roll down hillsides. This was the second time that most people in the area have had to evacuate in months — the first time because of the fires, and now the floods that have been made worse by those fires.

According to the Federal Emergency Management Agency, the fires from late last year made the mudslides worse than they should have been. It explains on the fact sheet for residents:

Santa Barbara County Sheriff Bill Brown said at a news conference, according to Reuters, "The best way I can describe it is, it looked like a World War One battlefield. The death toll could rise, with rescue workers still picking through dozens of damaged and demolished homes in the search for survivors."

Hopefully, law enforcement and first responders can get to everyone as soon as possible. And in the meantime, keep looking for the helpers like Johnson and his wife out there working hard to make sure everyone is safe.