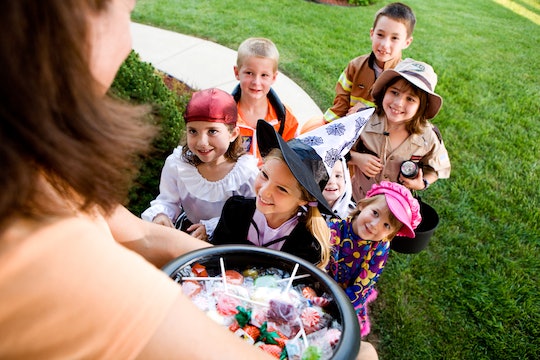 Basically as soon as September starts to wind down, thoughts of pumpkins, changing leaves, dropping temperatures, and just fall in general, begin to permeate. And along with all the lovely natural changes that fall brings about, also comes several holidays to kick off the holiday season. Halloween, of course, is the first to come into town, and its costumes, tricks, and treats make it a favorite among children. And so, if you plan on celebrating with your little one, this map of the most popular Halloween candy in each state might come in handy — or you might just want to buy one of each, honestly, who am I to judge?

Candystore.com looked at 10 years worth of sales data in order to determine what each state tends to buy the most of, and some of the results may surprise you. Of course, more than one state preferred the Halloween staple of candy corn, but quite a few had some pretty random results. So, what were the absolute biggest sellers?

Well, the largest continental state in America certainly came to party, it seems. Yeah, everything really is bigger in Texas, because the state loves Starbursts, and purchases 1,952,361 pounds of the candy each year for Halloween, according to the site.

And while Texas may have taken home to trophy for largest amount of candy purchased for Halloween over a 10-year period, that doesn't mean that other states don't rake in the candy either. Indiana, Michigan, New Mexico, Rhode Island, and South Carolina all really love candy corn, purchasing a combined total of 448,892 pounds of the sweet, chewy, unique Halloween-themed candy each year.

Of course, candy corn is probably the most controversial candy out there, at least in regards to Halloween. Many believe that it is truly a disgusting candy and not worthy of the title "treat." Others, though, are obsessed with candy corn and would defend it to the death. But, there is more than just the vegetable-shaped/themed candy on the line (can you tell where I stand on the candy corn debate?).

So, what are the other popular treats out there? Iowa, Kansas, Oregon, and Wyoming are all obsessed with Reese's Cups, and another chocolate-y candy is also pretty popular. Milky Way is another top chocolate Halloween candy choice, coming out on top in Vermont, Missouri, Maryland, and Colorado.

Of course, not everyone appreciates the candy madness that comes with Halloween. Many parents try to opt for healthier alternatives to straight-up candy, such as fruit, toys, or Halloween-themed snacks. But at the end of the day, one piece of candy likely won't cause irreparable damage, and if it makes your kid happy, then there really shouldn't be any shame in letting them indulge every once in a while.

More so, though, Halloween is supposed to be fun, and when parents are already spending a pretty significant amount of money on candy for just one night, it makes sense to want to buy the crowd-pleasing candy in your state. According to a new study from Ibotta, "Americans spent an average of $16.45 per person on Halloween candy."

And there is an ideal day to buy that candy to get the best price. According to AOL.com, the best time to go out and buy all that candy for your trick-or-treaters (and yourself, of course) is "Four days before Halloween (Oct. 27), when the average price was $1.94 per unit."

Whether you plan out your Halloween candy shopping excursion days ahead of time, the day of, or maybe even the day after (those are the lowest prices, trust me), this new map of the most popular Halloween candy in your state is sure to help you figure out what treats to buy more of, especially if you're one who likes to have a bowl or two of leftovers come November.

More Like This
Prince William Cracking Up With His Three Kids In This Candid Photo Is Too Adorable
Obamas Issue Powerful Statements After Supreme Court Ends Roe v. Wade
This Map Illustrates Just How Many States Would Ban Abortion If Roe V. Wade Is Overturned
Keep Talking To Your Kids About Abortion — It's More Important Than Ever