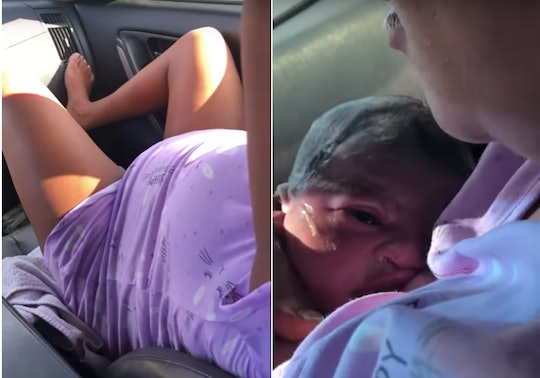 It may sound like a wild scene from a movie, but a real-life mom gave birth in a car, in the front seat, before they could reach the hospital earlier this month. And if you don't believe it, there's plenty of proof. The woman's attentive (and, TBH, very calm) 11-year-old son recorded the whole thing go down and, of course, the footage capturing this magical moment has since gone very viral.

The heroic mama, Rudy Napier of Nevada, was not quite at her due date when her fourth child decided it was time to make her grand debut. According to the New York Post, Napier "suddenly started going into labor" when she was on her way to the hospital for her last check-up before she was expected to deliver, which she thought would've been in about two week's time on June 8.

So as the whole family — mom, dad, and their three kiddos — drove to the hospital together, which was only about five minutes away from home, that's when, as Napier told TODAY Parents, "labor hit."

"I thought it was regular Braxton Hicks contractions," she told TODAY Parents. "We left to go get checked and en route, labor hit."

And, well, that's when Napier's son Jaydon stepped into action and started filming his warrior mama give birth in the front seat of the car. Michael Addison, Napier's husband, later shared his son's footage of the birth on Facebook and the video has over 10 million views and 70,000 shares so far.

Please note the video below contains graphic detail of a woman giving birth and may be difficult for some to watch.

The four-minute video begins with Naper in the front seat, moaning in pain while comforting her kids in the backseat that everything is OK. "It's OK you guys... the baby's just coming, OK," she says.

Proud papa Addison then addresses the camera and sends a message to his baby girl, Jolee. "Hey Jolee, it's your father, I just wanted to let you know you're making a grand presence in my car. We're on our way to the hospital, we love you and we'll see you soon."

The couple's oldest son, Jaydon, then turns the camera on himself and, as every big brother would, says, "Hurry up!"

Meanwhile, Jaydon's younger siblings, 8-year-old Jai’ahni and 4-year-old Jaida, are frozen in the backseat or with a few tears in their eyes. Because, ya know, their mother is clearly in pain and they're witnessing childbirth before their very eyes. It's emotional and intense! As Addison pointed out on Facebook, "you see the water break and shoot all over [his] dashboard" at 1 minute, 33 seconds.

Literally just minutes later, Naper grabbed ahold of baby Jolee and pulled her up to her chest and everyone watching (ahem, myself) instantly became overwhelmed with goosebumps.

A day after Jolee made her very grand entrance into the world, Addison shared an update with his followers on Facebook, calling the moment "a BEAUTIFUL nightmare!!" Addison went on to thank to the hospital staff for their "great immediate help and hospitality." He comically closed out his message, "P.S. next time I’ll make sure the truck is washed."

It sounds like everyone, but especially mom and baby, are doing well after Jolee's whirlwind arrival. As Napier told Inside Edition, "It was an experience, and it was the scariest and best experience I ever had."

As for Jayden? The 11-year-old filmmaker told People the whole ordeal was "crazy, honestly." He added, "I would say I was surprised 'cause we were just in the backseat. I was recording and I guess he forgot I had the phone."

Whew! I think everyone can agree with Jayden that this experience, even just from afar, has been pretty wild and pretty magical to witness.

More Like This
Should You Bring Your Breast Pump To The Hospital? Here's The Deal
This Is How Your Water Breaks During A C-Section
Post Malone Just Revealed He's Welcomed His First Child AND He's Engaged!
Viral TikTok Breaks Down How Beautifully Bluey Depicts One Character’s Infertility