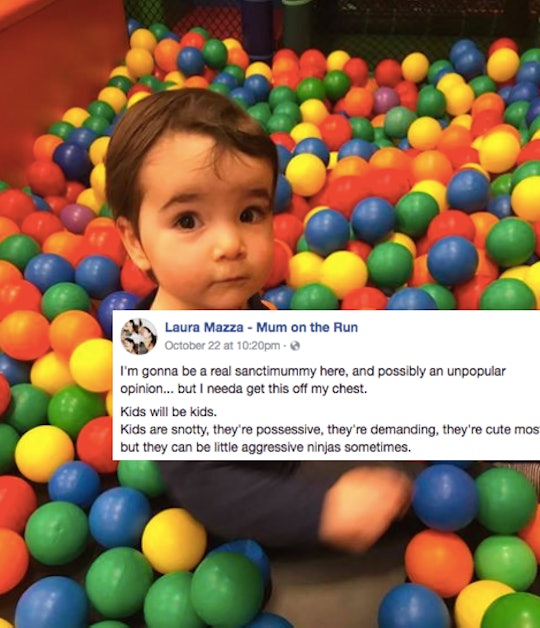 Taking your kids to the playground can be such a complicated experience for parents. The playground is a lifesaver for tiring out your kids, hanging out with other mom friends, and maybe catching a blessed five minutes of relative quiet in an otherwise chaotic day. But even then, the playground is not without its share of parenting drama, shaming, and the mommy wars. That's why this mom got real AF about watching your kids at the playground, and her take-no-prisoners Facebook post has already gone viral.

Laura Mercer is the mom behind the popular The Mum On The Run blog. On Sunday, she took to her blog's Facebook page to vent about the madness at her local child's play center, particularly when it comes to parents not really paying attention to their kids. Mercer described how at a recent trip to this play center, she had to get involved with kids other than her own — despite how much she absolutely didn't want to, because, truthfully, she shouldn't have to.

Today I found myself saying the words "hey, that's not nice... please stop" to two little kids. Kids that weren't mine. Why? Because no one else was gonna do it.

Oh Laura, we have all been there. Her post only gets more brutally honest and it's a must-read.

According to Mercer's Facebook post, she tends to get a little extra protective of her kids at the play center — something to which I can completely relate — because, other people's kids, am I right? While there, her daughter was rammed by a little drivable play car by two other 5-year-olds. Another little boy was left to climb on top of a jungle gym, seemingly without supervision and very near falling. And then, just when it seemed like the madness would stop, two other little boys began pushing and smacking her son while he tried to go down the slide.

Just reading Mercer recall her awful experience already has my mama bear instincts fired up and ready to charge — but, Mercer found herself at the crossroads of being a "helicopter parent" and "sanctimommy" at that moment. Does she step in, or not?

I've never told another child off in my life. I don't like it. It's not my responsibility. My responsibility, like I said, is to my child. If my son snatches, I correct him, if my daughter smacks, I correct her, if my kids are *ssholes, I step in. This behaviour is not okay at any age. However, today I found myself saying the words "hey, that's not nice... please stop" to two little kids. Kids that weren't mine.

In addition to having to confront the four kids terrorizing her own, she also stepped in to help out the little boy stuck on the jungle gym, only to be met with accusatory glares as the boy's mom "gave me a dirty look while she snatched him off me," according to Mercer's Facebook post.

For Mercer, the need to step in was real, valid, and immediate — and she doesn't think it should just be up to her. In short, Mercer tells parents: "Watch ya damn kid." But at the same time, she expects other parents to call out her kids when they misbehave and she might not have seen it:

I also don't believe that my kid is entitled to pull your kids hair because I want a hot coffee. And if you see my kid be a jerk, you tell him off too, or tell me and I'll correct him asap.

Ultimately, Mercer believes it all comes down to a sense of community as parents, fighting the real struggle of parenting tiny humans who are just barely in control of themselves at any given moment. We are all just trying to get through this, so why not support each other when we can?

Mothers if we don't have each others backs like this, then how can it be a smooth experience for all? This is a village and it only works if we all do our part, that way we can all have a good time.