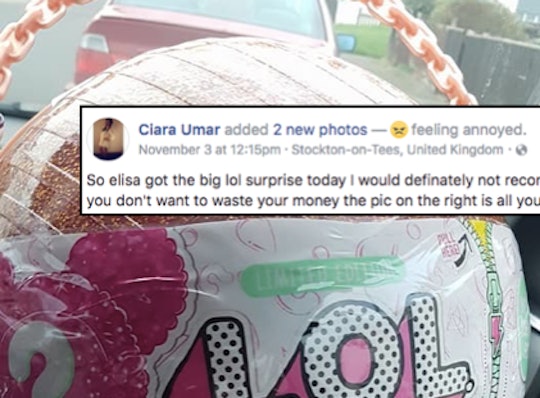 Each year a secret society of 5-year-olds meets to determine what the must-have toy of the year will be and how to most effectively guilt parents into surrendering their nest egg and their sanity to get it. This year's chosen toy is the LOL Big Surprise Toy, but one mom is not impressed by it at all. The high price tag and lack of variation have been enough to garner some bad press for the toy and lead many moms to vocalize their opposition along with her. Romper has reached out to MGA Entertainment, the company that makes the LOL Big Surprise, for comment and is awaiting a response.

Gone are the days of Tickle-Me-Elmos and the infamously frightening Furbies. Kids these days apparently expect a little bit more from their toys than talking and laughter that previous generations were so taken with, and the LOL Big Surprise Toy certainly has a lot going on. In case you missed it, the LOL Big Surprise launched in March with great success. The new limited edition version of the large ball comes with 50 individual toy-filled balls inside for children to unwrap, according to The Sun. Some of these toys are contained in bath bombs, requiring children to submerge them in warm water to unveil the surprise.

While the "LOL" aspect of the toy is unexplained, some parents are laughing at the high price tag. It is currently retailing at $140 on Amazon, according to Scary Mommy who describes the toy's surprise "like a bunch of Polly Pockets communes exploded in your living room."

One mom, Ciara Umar, posted her own experience with the pricey toy on Facebook, warning other parents that is a "waste of money." Since sharing her post last week, it's been shared almost 8,000 times and has gotten almost 6,000 comments.

Judging by those comments, Umar isn't the only mom who is less than impressed by the new toy. Commenters on the LOL Big Surprise Amazon page pointed out the lack of variety in the included toys, as well as the fact that each ball has the same set of dolls inside. One such mom wrote:

The allure of LOL dolls has always been the surprise of which doll you're getting. Not with this big surprise. I purchased 3 for my daughters, 2 from Amazon and 1 from another store. All of them had the same exact dolls, so there's no "surprise" at all. All I got were disappointed daughters who now have triple of each doll.

Another explained that her daughter watched another child on YouTube open the toy, ruining her own experience due to the lack of variation:

We bought these for our daughters not realizing that the contents are exactly the same in every one of these. Our daughters had already watched an unpacking of one of these on Youtube without us realizing they were all the same, so we had to return these once they arrived

Despite these less than stellar reviews, the LOL Big Surprise is already sold out on Amazon and parents still willing to pay big bucks for the ball will have a tough time finding it. The Big Surprise is essentially just a larger version of the popular LOL Dolls, which Cleveland.com reported will go for about $10. Parents looking for an alternative gift that also comes in at the top of the must-have list can consider the latest Hatchimals, Legos, or a DIY slime maker.

Choosing the perfect gift can be hard, but remembering that the holidays aren't all about the gifts and modest holiday shopping doesn't mean that you love your children any less can help take off some of the pressure. If you do choose to go after this year's coveted toys, do your research and prepare for a bit of a hunt.