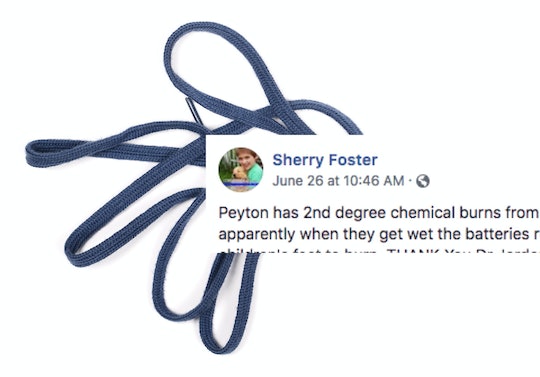 Parents have a lot to worry about these days and protecting kids from any type of hazards that could put them in danger is basically a full-time job. So you can probably imagine just how stressful and scary it might be for a parent to come across a seemingly harmless everyday object that somehow caused their child harm. That's why this mom's warning about her child's light-up shoes allegedly leaving him with chemical burns has quickly gone viral. In less than a week, Sherry Foster's Facebook post has managed to attract nearly 490,000 shares and more than 43,000 reactions.

Alongside photos of her son's blistered feet, Foster shared a warning to fellow parents about the potential danger of popular light-up shoes, as Kid Spot reported on Monday. "Peyton has 2nd degree chemical burns from his sketcher [sic] lightable [sic] shoes," Foster wrote in a Facebook post shared on June 26. "Apparently when they get wet the batteries release a chemical causing children's feet to burn. THANK You Dr Jordon for taking the time to see and treat him in your booked solid day! greatly appreciated!"

In an emailed statement to Romper, a representative for Skechers said that the company's "footwear products are rigorously tested for safety" and that it "has sold millions of pairs of children’s lighted footwear worldwide and has not had one incident of chemical burns reported."

The statement continued, "Notwithstanding, when Ms. Foster’s Facebook post was brought to our attention Friday, June 29, we immediately contacted her, inquired about her son, and asked her to send us the shoes so we can determine whether the shoes contributed to her son’s injuries."

The representative for Skechers also stated that Foster "has agreed send us the shoes, and we will continue our investigation." The statement concluded, "Despite the lack of any other similar reported incidents, we are taking this complaint very seriously and giving it the highest priority."

Sherry Foster did not immediately respond to Romper's request for comment, but she told CafeMom that she believes that because the lights in his sneakers stopped working, that "was a clue that it was his shoes that gave him chemical burns and she had seen this kind of burn once before." Foster further explained to CafeMom that her son's specific type of Skechers shoe was the Skech Rayz, which "had an on and off switch." She told CafeMom, "If parents buy these, I recommend they do not get them wet or jump in puddles. I know kids love them because of the cool lights but be careful."

The comments section of Foster's viral post was understandably filled with shocked and concerned reactions. One such Facebook user wrote, "That’s crazy, as many pairs of those things we’ve gone though we’ve never had this happen! Will definitely be more cautious so it doesn’t in the future! Hope he heals quickly!"

Back in 2016, in what initially appeared to be a similar incident happened with another pair of light-up shoes to a family in Texas, as CBS News affiliate KHOU reported at the time. In July of that year, according to KHOU, Attila and Jovan Virag noticed a "dark haze" inside their SUV, which ultimately had been a fire in the backseat that had burned a hole through the floor and melted the passenger seat. "There just wasn't anything in there to start a fire," Jovan told KHOU. "Only shoes and clothes." Ultimately, according to KHOU, the Harris County Fire Marshal's Office ruled the tennis shoes did not cause the fire.

Because Skechers is reportedly working on determining whether the shoes in question caused any harm, it's hard to conclude if light-up sneakers do pose a risk or if what happened to Foster's son was rare incident. Hopefully everyone involved will be able to get to the bottom on what happened soon, because parents already have enough they need to be worrying about.