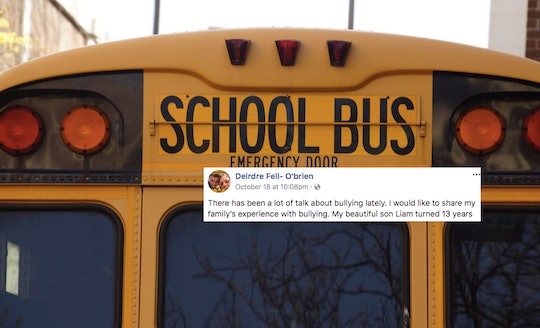 It's a miserable existence no child should have to face, and something no parent wants to see their kid suffer through. But unfortunately, bullying is a reality for far too many children — and one fed-up mom refuses to remain silent any longer. Which is why this mom's gut-wrenching post about her bullied son who stopped eating is a wake-up call for parents to know the signs. Because it could happen to your child, too.

Update: Garden City Public Schools, the boy's school district and where the bullying allegedly took place, told Romper in a statement that it was "deeply saddened to learn of a recent issue of bullying shared on social media." The statement added that the district "has a great number of anti-bullying initiatives in place and spends countless hours in training staff to recognize and prevent such behaviors." The statement concluded by urging parents to speak with their children about "not just about their experiences, but also about those of their friends," adding:

Ask about their friends and how they are getting along. Report any concerns such as a change in behavior, eating or sleep habits, to the teachers, guidance counselors, social workers, psychologists or administrators as soon as observed. Help us to help each other.

Earlier: Back in September 2016, Liam O'Brien was a happy, seventh-grade kid who "loved riding his bike, eating spicy breakfast sandwiches and watching football with his dad," according to Us Weekly. But now, the 13-year-old is reportedly receiving treatment for an eating disorder and depression after he was allegedly bullied at school and soccer practice, as his mom detailed in a now-viral Facebook post.

Liam's mom, Deirdre, took to Facebook to share the series of events she believes led to Liam's current condition — five weeks, so far, at a children's hospital. It all started when Liam made the soccer team last fall, according to his mom.

“As the season ended and winter came, Liam gave me back his iPhone. He said, ‘Too much drama mom,'" the Long Island mom wrote on Facebook, explaining he also stopped spending time with friends. “He hung out at home with us. I was happy but I kept asking if anything happened and was everything OK?’”

However, according to Us Weekly, Liam assured his parents that everything was fine and continued playing soccer. Then, toward the end of the school year, someone allegedly punched Liam on his way to the school bus home, NBC News 4 New York reported. Through the summer months, Liam spent more time with his father, and didn't pick up a soccer ball at all, his mom wrote on Facebook.

Then he started losing weight. According to this mom, Liam lost 10 pounds in just a month and was reportedly admitted to a children's hospital in New York, according to local news outlets. "I sobbed looking at him because he was just bones," Deirdre told NBC News 4 New York. "I said to Keith, 'He’s going to die.'"

In the first week of this school year, Liam's mom wrote that he had lost another 5 pounds. Liam's parents ended up taking him back to the hospital after his birthday on Sept. 8, when he returned from school with bruises on his face. He didn't eat his birthday dinner and didn't return to school on Monday, his mom explained in the post.

Finally, Liam divulged what had been going on. Deirdre wrote on Facebook:

We sat at the kitchen table and we cried and I said please tell me what happened. He finally couldn’t hold it in anymore. He told me he was bullied terribly in 7th grade. It started when he made the soccer team. 2 kids told him he sucked and shouldn’t have made the team. There were unnecessary pushes and kicks. He was told he was weird, he was fat, his freckles were weird, his eyebrows were weird. They used horrible language and called him nasty words.

"I asked him how often it happened," Deirdre added. "He looked at me crying and said, 'Everyday Mom.'"

Liam's parents reported the alleged bullying to his school, which it reportedly investigated and ultimately deemed it "unfounded," according to NBC News 4 New York. The district told Us Weekly in a statement:

The district has a great number of anti-bullying initiatives in place and spends countless hours in training staff to recognize and prevent such behaviors. We are jointly attempting to further improve upon the resources and programs available to move toward the elimination of all forms of bullying in our schools as quickly as possibly.

"It hurts, it’s almost like they are saying we don’t believe you or perhaps the perception of what your child felt wasn’t really real," his father, Keith O'Brien, told NBC News 4 New York.

So far, this mom's Facebook post has been shared nearly 2,000 times and has garnered nearly 3,000 reaction. The family has also encouraged supporters to wear an orange shirt in solidarity with bullying victims on Oct. 25, Unity Day.

According to Stopbullying.gov, about 21 percent of students ages 12 to 18 experience bullying. Signs that your child may be facing a bullying problem include the following:

However, every child is different. Some children may not display these signs, and according to Stopbullying.gov, an adult is notified of bullying only 40 percent of the time.

The bottom line: Talk to your kids about bullying. Reassure them that it's OK to come to you with any problem they may have. Know the signs and if you feel something is "off" with your child, start a conversation. Because no one deserves to be a victim of bullying — and no child should have to face a bully alone.